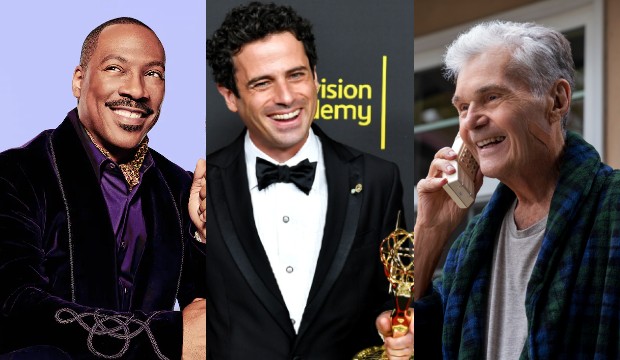 You can now predict the 2020 Emmy Award nominations for the guest categories in the Gold Derby predictions center. Best Comedy Guest Actor pits reigning champion Luke Kirby for his recurring role on “The Marvelous Mrs. Maisel” as historical comedian Lenny Bruce (1925–1966) against co-stars Jason Alexander and Zachary Levi, plus a slew of “Saturday Night Live” hosts, most notably Eddie Murphy. He was nominated as a regular “SNL” cast member in 1983 and 1984 and contends now for his first “SNL” hosting gig since the latter year. The last “SNL” of 2019, the episode ranks as the series’ best ever on IMDb and it has already won Don Roy King an award from the Directors Guild of America.

In addition to other regular-season hosts like John Mulaney and Will Ferrell, “SNL” possibly contends with guests like Tom Hanks and Brad Pitt who featured in their recent “At Home” episodes. Among the nominated “SNL” guests last year was Robert De Niro, who did not host, but was instead nominated for his recurring impression of special counsel Robert Mueller. This sets the stage for the eligible impressions by Fred Armisen and Larry David of Democratic candidates Mike Bloomberg and Bernie Sanders, although we have no final confirmation from NBC about which “SNL” people are on the ballot.

Speaking of those two, “Curb Your Enthusiasm” is campaigning Jon Hamm, Nick Kroll, Clive Owen, Vince Vaughn and Armisen as well to score their fifth nomination in the category (and first win). “Brooklyn Nine-Nine” is another long-running sitcom in the mix; its guests this season include Oscar winner J.K. Simmons in the hunt for his first Emmy nomination, as well as Martin Mull and Bradley Whitford, who were nominated against each other in this category four years ago.

The late Fred Willard was last nominated at the Emmys a decade ago in this category for the first season of “Modern Family” and he now contends for its final with co-star Stephen Merchant. Willard stands to be the first posthumous guest nominee since Carrie Fisher for “Catastrophe” and also stands to be the first guest nominated opposite himself, as he also contends for the first season of “Space Force” with co-star Noah Emmerich. Others looking for goodbye hugs include the final seasons of “The Good Place” (Nick Offerman, Timothy Olyphant), “Schitt’s Creek” (Victor Garber, Dustin Milligan) and “Will and Grace” (Matt Bomer, Leslie Jordan, Patton Oswalt).

The debut seasons of “Little America” (Zachary Quinto, Suraj Sharma) and “Modern Love” (Dev Patel, John Slattery) are following the academy’s recent mandate for episodic anthologies to submit outside of the limited series field; they look to take after the revival season of “The Twilight Zone,” which got one-off star Kumail Nanjiani a Best Drama Guest Actor nomination last year.

Who do you think will be nominated? Other contenders include “The Conners” (Dan Aykroyd, Matthew Broderick, Johnny Galecki), “Dear White People” (Blair Underwood), “Grace and Frankie” (Michael McKean), “The Kominsky Method” (Bob Odenkirk), “Lodge 49” (Paul Giamatti), “Nora from Queens” (BD Wong), “The Politician” (Bob Balaban, Dylan McDermott) and “What We Do in the Shadows” (Mark Hamill).

Make your Emmy predictions so that Hollywood insiders can see how their shows and performers are faring in our odds. You can keep changing your predictions as often as you like until the nominations announcement on July 28. And join in the fun debate over the 72nd Primetime Emmy Awards taking place right now with Hollywood insiders in our television forums.