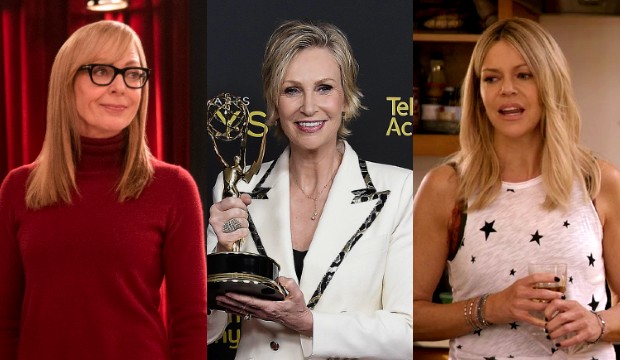 You can now predict the 2020 Emmy Award nominations for the guest categories in the Gold Derby predictions center. Best Comedy Guest Actress reigning champion Jane Lynch is back to defend her crown, but with a couple of caveats. Her winning role in “The Marvelous Mrs. Maisel” was upgraded to the main cast this season, so she contends now in Best Comedy Supporting Actress for that performance, but she can still win in this category through her recurring part on the new “Space Force.” That sitcom is also campaigning co-star Kaitlin Olson, who is also being campaigned for her spot on “Curb Your Enthusiasm” and is thus aiming to be the first to be nominated against him or herself in a guest category.

She is one of many actresses this year in contention for multiple comedy guest spots, opposite the likes of Laverne Cox (“Curb Your Enthusiasm” and “Dear White People”), Marla Gibbs (“The Last O.G.” and “One Day at a Time”), Maya Rudolph (“The Good Place” and “SNL”) Molly Shannon (“Better Things” and “Will and Grace”), Wanda Sykes (“black-ish” and “The Marvelous Mrs. Maisel”) and Phoebe Waller-Bridge (“Run” and “SNL”). Vanessa Bayer could get three nominations if she is submitted for “Brooklyn Nine-Nine,” “Shrill” and “Will and Grace.”

NBC has not confirmed “Saturday Night Live” submissions, but that sketch show is a staple of this race. Hosts this season included Jennifer Lopez, Scarlett Johansson and Kristen Stewart, with Kristen Wiig hosting “At Home” for a special edition that served as the season finale. Also contending for a variety performance is Angela Bassett on the first season of “A Black Lady Sketch Show.” Other debut runs in contention include “#blackAF” (Lena Waithe), “Dollface” (Margot Robbie), “Love Life” (Hope Davis), “Modern Love” (Tina Fey), “The Politician” (Judith Light and Bette Midler) and “Zoey’s Extraordinary Playlist” (Bernadette Peters).

Oscar winner Allison Janney contends for her cameo as herself in the second season finale of “The Kominsky Method.” Having won Best Drama Actress and Best Drama Supporting Actress for “The West Wing,” Best Drama Guest Actress for “Masters of Sex” and Best Comedy Supporting Actress for “Mom,” for which she has also been nominated in Best Comedy Actress, this category is her final frontier in the continuing series categories for actresses. Janney might have crossed Best Comedy Guest Actress off her bucket list for “Veep” in 2013 if she had submitted for consideration. She actually stands to run the gamut this year, contending for “Troop Zero” in Best Movie/Limited Actress, “Bad Education” in Best Movie/Limited Supporting Actress and “Expedition Amelia” in Best Narrator.

What comedy guest actresses do you think the academy will nominate? Make your Emmy predictions so that Hollywood insiders can see how their shows and performers are faring in our odds. You can keep changing your predictions as often as you like until the nominations announcement on July 28. And join in the fun debate over the 72nd Primetime Emmy Awards taking place right now with Hollywood insiders in our television forums.