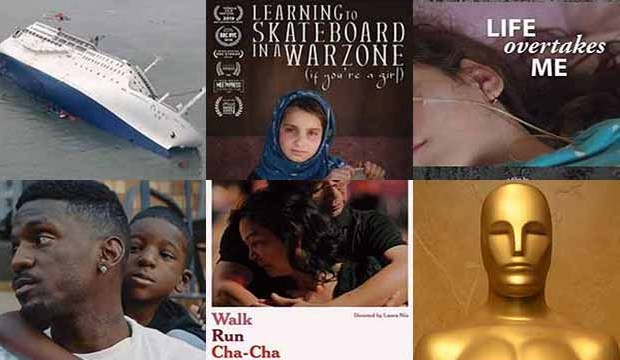 If you look at our official racetrack odds, you’d see that the short film, “Learning to Skateboard in a Warzone (If You’re a Girl),” is thought to be far out front for this year’s prize for Best Documentary Short. The odds that are displayed there are taken from the forecasts made by our Expert film journalists, Gold Derby Editors, Top 24 Users and the thousands of regular Gold Derby readers making their predictions at home.

But could another one of this year’s nominees sneak in and pull off an upset? Are there any other shorts that is more of a traditional fit for the Oscars? Below, let’s take a closer look at all five of this year’s nominated short documentaries, in order by their current Gold Derby odds.

The rights of women in Afghanistan is still in a very delicate place, but even with the dangers that surround them, young girls are attending schools and getting educated. This includes the Skateistan school in Kabul, which in addition to giving them an education, teaches them to skateboard as a way to gain confidence. We meet the administrators and teachers who help the school function and a collection of young girls who have career aspirations thanks to the program.

Both Carol Dysinger and Elena Andreicheva have earned their first Oscar nomination for the film.

Pros: Though the situation in Afghanistan gives the film a dark undertone, it’s an overwhelmingly positive experience about an important issue. Seeing the girls skateboarding and describing what they hope to be when they grow up is infectious. The short also has similar tones to other winners in this category including “Saving Face,” “A Girl in the River: The Price of Forgiveness” and “Period. End of Sentence.” The title is compelling as well.

Cons: The short could be seen by some as meandering and other voters may not understand how learning to skateboard can give someone confidence.

The short follows Bruce Franks, Jr., a battle-rapper and community activist who won election to the Missouri State House of Representatives. He’s also constantly haunted from witnessing the shooting death of his older brother when he was nine. We him in office trying to represent his community and also fight to get youth violence to be declared a public health epidemic.

This has earned both Sami Khan and Smriti Mundhra the first Oscar nominations of their careers.

Pros: Of the all the nominees in this category, this is the only one that has a singular character to root for and you can’t help just rooting for Franks to succeed in all that he hopes to accomplish. It’s also the only nominee that focuses on a purely American issue and that could help it. It also benefits from having Sheila Nevins, the longtime former head of HBO Documentaries, behind it.

Cons: The ending can feel a little defeatist and doesn’t go into much detail about the nature of his obstacles in getting his legislation passed into law.

SEE Who is Performing at the Oscars 2020?: Full List of Presenters and Performers

Paul and Millie Cao are a married couple living in Southern California. They first met while living in Vietnam in the aftermath of the Vietnam War they were forced apart when Paul migrated to the U.S. After reuniting in America and eventually getting married, the two are now enjoying their time together by taking dance lessons, an activity that was forbidden by the Communists in Vietnam.

Pros: It’s hard not to fall in love with Paul and Millie. They’re wonderful to watch together. Plus it’s really fun to see the culmination of their dancing skills with the routine they perform at the end.

Cons: For all the sweetness that the short has, I don’t think voters will see it as having enough gravitas to merit a win in this category.

The short recounts the April 2014 sinking of the MV Sewol ferry off the coast of South Korea. The situation became a disaster when the Korean Coast Guard took over 30 minutes and passengers were instructed to stay in their cabins and it resulted in the deaths of over 300 people, including 250 students from a high school. The government’s incoherent response helped to propel the impeachment and removal of President Park Geun-hye.

This is the first Oscar nominations for Seung-jun Yi and Gary Byung-Seok Kam.

Pros: It’s insanely compelling. Watching the footage of the ferry slowly sinking while also hearing the complete inaction of the authorities is harrowing and heartbreaking. Then seeing several of the parents who lost children here makes it all the worse. It also has a bit of a relevant connection to our current political situation.

Cons: Shorts with archival footage don’t usually do well here and though it chronicles a devastating tragedy, there may be a sense that it doesn’t rise to the level of importance that some other nominees do.

SEE Oscar Hosts: Performers Who Have Hosted the Academy Awards

The short examines three refugee families in Sweden who have children that are experiencing Resignation Syndrome. The syndrome is marked by children retreating from their lives into a coma-like state where they don’t move at all. The condition has become prevalent in Sweden among children of refugees whose immigration status is in limbo.

This is the first Oscar nomination for John Haptas and the second nomination for Kristine Samuelson who was nominated in this category in 1975 for “Arthur and Lillie.”

Pros: The footage of these kids having to be cared for in every aspect of their lives is devastating but the film does manage to end on a somewhat more positive note. It also has a correlation with the current immigration situation although no cases of Resignation Syndrome affecting children detained on the southern border. Having Netflix behind it doesn’t hurt either.

Cons: It’s definitely the bleakest of the nominees this year and those do not usually triumph.