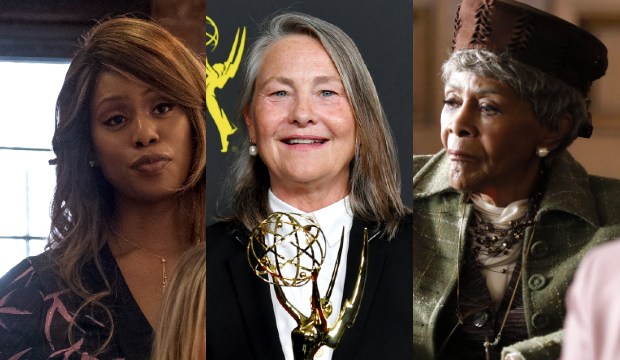 You can now predict the 2020 Emmy Award nominations for the guest categories in the Gold Derby predictions center. Best Drama Guest Actress reigning champion Cherry Jones is back to defend her crown — from herself. In addition to her part on “The Handmaid’s Tale” for which she received back-to-back nominations for different episodes from the second season, she also contends this year for her new role on “Succession,” which remains the odds-on front-runner to win Best Drama Series.

Jones is not the only “The Handmaid’s Tale” actress eyeing another win in this category. Alexis Bledel is back in contention for the eligible third season, having won this category for the first season before being nominated in Best Drama Supporting Actress for the second. Bledel and Jones are joined by new co-star Julie Dretzin and returning co-star Clea DuVall.

Bledel and Jones again face perennial nominees Laverne Cox (“Orange is the New Black”) and Cicely Tyson (“How to Get Away with Murder”), now contending for their final seasons. Longtime recurring players Amy Hargreaves (“Homeland”) and Gloria Reuben (“Mr. Robot”) also contend for their final seasons and are vying for first nominations for these roles.

After winning Best Drama Guest Actor for both of its first two seasons, “This is Us” broke through with a nomination in this category last year for Phylicia Rashad. “This is Us” has several strong contenders this year, including Rashad again, as well as Emmy-winning “Better Things” star Pamela Adlon, Jennifer Morrison for a seven-episode stint and Marsha Stephanie Blake, who is also eligible for “How to Get Away with Murder” after receiving her first Emmy nomination last year (Best Movie/Limited Supporting Actress for “When They See Us”).

Past Emmy nominees and winners contending for their current roles for the first time include Joan Cusack (“Homecoming”), Mindy Kaling (“The Morning Show”), Julianna Margulies (“Billions”), Adina Porter (“The Morning Show”) and Mary Steenburgen (“On Becoming a God in Central Florida”).

What drama guest actresses do you think the academy will nominate? Make your Emmy predictions so that Hollywood insiders can see how their shows and performers are faring in our odds. You can keep changing your predictions as often as you like until the nominations announcement on July 28. And join in the fun debate over the 72nd Primetime Emmy Awards taking place right now with Hollywood insiders in our television forums.