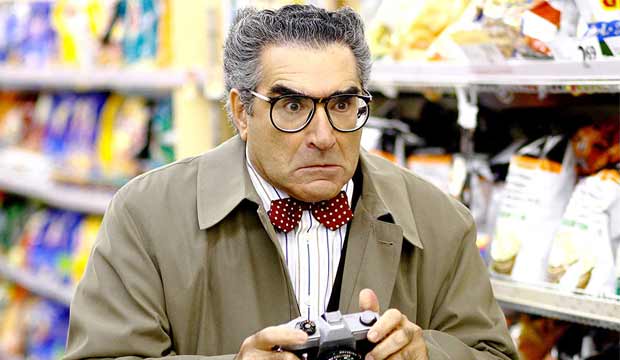 You might know him as the dad from ‘“American Pie,” or maybe he’s just “that guy” from one of his many cameo roles. Most recently he appeared in the critically acclaimed TV comedy “Schitt’s Creek,” the comedy about a rich family stuck in a one-horse town that he co-created with his son, Dan Levy. No matter where you know him from, Eugene Levy has been a welcome sight in funny movies for decades, from the lowest of the lowbrow to some of the most well-respected of all comedic films. His signature character is a well-meaning dork, completely out of touch and utterly oblivious to how he comes across to other people even though his heart is in the right place. Let’s take a look back at some of his most memorable roles by counting down his 20 greatest films, ranked worst to best.

Levy got his start on the Canadian sketch comedy show Second City TV, better known as “SCTV.” His earliest film roles were collaborations with his “SCTV” alumni, including Harold Ramis and John Candy. Later he would become one of the frequent members of director Christopher Guest‘s comedic ensemble, acting in and co-writing four of his films. Levy has won two Emmys for his work writing for “SCTV,” and he was nominated for Best Comedic Actor for “Schitt’s Creek,” which reunites him with fellow “SCTV” alum Catherine O’Hara. He also has a Grammy, which he received for his work on the musical comedy “A Mighty Wind.”

Levy is one of the few comedic actors who can play the straight man and still be funny; he’s also one of the few who is able to elevate almost any scene he’s in. Even in his goofiest roles he is capable of imbuing his character with a surprising amount of warmth and humanity. Put on your favorite Mitch Cohen record as we count down Levy’s greatest film roles, from his early SCTV days to his recent collaborations with Guest. Our photo gallery includes such titles as “A Mighty Wind,” “Best in Show,” “American Pie” and more.

'The Way I See It': From Critics' Choice winner to Oscars?