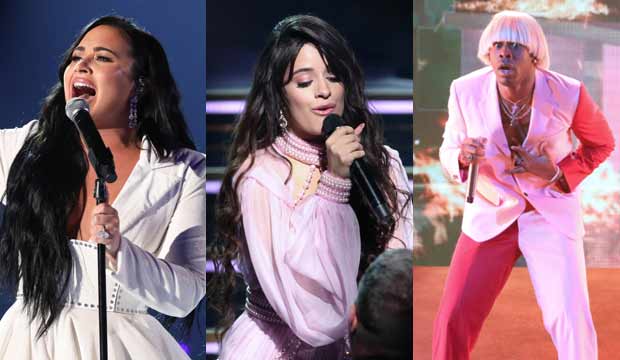 The 2020 Grammys telecast ran close to four hours long since they were crammed from beginning to end with all-star performances, but which was the highlight of the evening? Scroll down to vote in our poll at the bottom of this post, and check out the complete list of winners here.

The stellar performances can be sorted into a few different categories. There were the emotional tearjerkers, of which the biggest might have been Demi Lovato‘s deeply personal rendition of “Anyone,” which she performed following her continued struggles with addiction and mental illness. The song was an emotional plea so raw that she almost couldn’t get through it, so broken up that she had to start over after a false start.

Camila Cabello also pulled our heartstrings by serenading her father with her song “First Man,” which paid tribute to the first man who ever loved her. She sang with video footage of her as a child with her dad in the background, and her father was crying by the time she made her way down the stage to him.

But then there were the bigger showstopping production numbers like Tyler the Creator‘s dramatic, even somewhat unsettling medley of “Earfquake” and “New Magic Wand.” It brought the house down — almost literally.

We also got a big gospel-infused production number in honor of the late Nipsey Hussle featuring John Legend, Kirk Franklin, DJ Khaled, Meek Mill, Roddy Ricch and YG. And near the end of the show dozens of singers and dancers performed “I Sing the Body Electric” to celebrate 40 years of work by Grammys executive producer Ken Ehrlich, who’s stepping down after this year’s event.

Other performances were stripped down, letting voices and instruments do the talking in intimate numbers like Billie Eilish and her brother Finneas on “When the Party’s Over,” Tanya Tucker and Brandi Carlile on “Bring My Flowers Now,” and telecast host Alicia Keys paying tribute to the late Kobe Bryant — who died earlier that afternoon in a helicopter crash — with Boyz II Men on an a cappella version of “It’s So Hard to Say Goodbye to Yesterday.”

Those are just the tip of the iceberg. Vote for your favorite among all of Sunday night’s performances below.