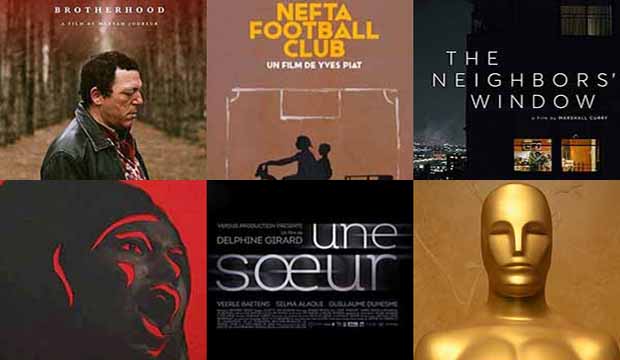 According to the odds in our predictions center, “Brotherhood” seems to be the overwhelming favorite to win this year’s Oscar for Best Live Action Short. These odds are derived from the forecasts that are being made by our Expert film journalists, Gold Derby Editors, Top 24 Users (our top Oscar predictors from last year) and the thousands of Gold Derby readers who participate in our predictions center.

But is “Brotherhood” really that out front for Sunday’s ceremony? Could one of the other nominees pull off an upset? Let’s examine all five of this year’s nominees, in order by their current Gold Derby odds.

Mohamed, who lives in rural Tunisia with his wife and two of his sons, becomes very suspicious when his oldest son, Malek, unexpectedly returns home from Syria. The fact that Malek has returned with a new wife, who wears a full niqab, makes Mohamed even more suspicious that Malek might have been associated with ISIS while in Syria. Mohamed must then reconcile his love for his son with his fears that he’s part of something very destructive.

This is the first Oscar nomination for Meryam Joobeur and the second for Maria Gracia Turgeon, who was nominated last year in this category for “Fauve.”

Pros: With its gorgeous cinematography, it’s easily the most cinematic of the the nominated shorts and the performance given by Mohamed Grayaâ as the father is very gripping. The chemistry that’s captured between the three brothers is also very genuine and makes the climax of the film all the more devastating.

Cons: Even though it’s a short film, some might feel that the film would have been better served if it had taken a bit more time to establish some of the bonds of the family. Also, the ending can feel a little abrupt.

Alli is the mother of three very young children and lives in Manhattan with her husband, Jacob. When a free-spirited young couple moves into the apartment across the street from them, Alli and Jacob become fascinated with them. As time passes, Alli begins feeling resentment towards the young couple until she makes a startling realization about their lives that makes her more appreciative of what she has.

This marks the fourth career Oscar nomination for Marshall Curry. He was nominated in Documentary Feature for “Street Fight” (2005) and “If a Tree Falls: A Story of the Earth Liberation Front” (2011). He was also nominated last year in Documentary Short Subject for “A Night at the Garden.”

Pros: In addition to being very well-made and very striking with how the subject material is handled, it’s also the only English language nominee, which can give it a serious leg up in the race. It also has several known actors in it, most notably Maria Dizzia, who was on “Orange is the New Black.”

Cons: In this lineup, the fact that it doesn’t feel like it addresses a larger societal issue could hurt it along with some not caring for the sudden left-turn the film takes about three-quarters of the way through.

Two sisters in a Guatemalan orphanage dream of escaping their filthy and abusive conditions. One day, with the help of the boys on the other end of the facility, they orchestrate an actual escape with hopes of making it to the U.S. border. While on the run, they are captured which sets in motion a series of events that leads to a horrific tragedy.

This is the second Oscar nomination for Bryan Buckley, who was nominated in this category in 2012 for “Asad.” It’s also the first nomination for Matt Lefebvre.

Pros: This category loves films that have children as the subject matter and this one does that in the largest scale of any of this year’s nominees. It also inspired by an actual tragedy and addresses an issue of importance which could also give it another advantage in the race.

Cons: It’s easily the most devastating of the nominated shorts and those films do not have a good track record in this category. The way the ending is handled could also put some voters of as well.

When a woman finds herself in an incredibly dangerous situation, she calls emergency services and must communicate to the dispatcher her grave situation without letting her assailant realize that she’s trying to call for help.

Delphine Girard earns her first Oscar nomination with this short.

Pros: It’s easily the most tense of this year’s nominees and builds that tension extremely effectively. It also invokes other nominated/winning short films of the past with similar themes including “The Phone Call,” “Crisis Hotline: Veterans Press 1” and “Just Before Losing Everything.”

Cons: Some of the factors of the main woman’s situation are unclear and can take a person out of the film’s tension. Also, reminding voters of other nominated shorts could hurt the film too and the most tense films very rarely win.

Two young brothers in Tunisia find a donkey in the desert wearing headphones. The older brother also discovers several bags of white powder being carried by the donkey. Telling his younger brother that it’s laundry detergent, the older brother seeks to find people to sell the powder to.

Pros: Because it’s the only comedy in this batch of generally dark nominees, this film could be that apple in a basket of oranges that we talk so often about. The fact that it centers around two young children also makes it a compelling choice. This could be a serious spoiler.

Cons: The comedic nature of the film might make some voters feel like it’s not important enough for them to vote for. Couple that with the fact that outright comedies do not usually win in this category.