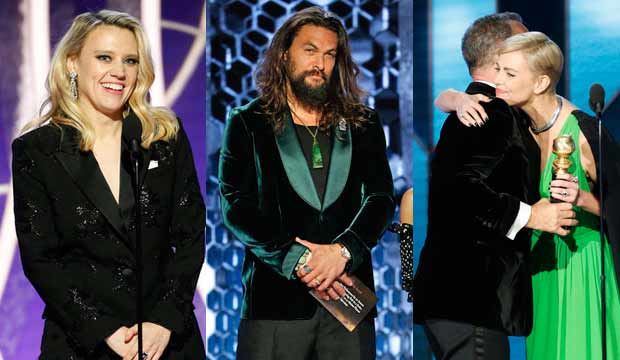 There were some great speeches at the 2020 Golden Globes ceremony (vote for your favorite here). But what was the best moment of the night that didn’t involve the winners? Let us know by taking our poll at the bottom of this post.

A couple of my favorite moments involved the presenters of honorary awards. Kate McKinnon presented the Carol Burnett Award to Ellen DeGeneres for her lifetime achievements on TV, and it was a perfect choice. DeGeneres took a big risk by coming out of the closet in the 1990s during what was, at the time, the height of her career, and she paved the way for comedians like McKinnon to be out and proud without stigma. McKinnon was visibly emotional when thanking DeGeneres for opening the door for queer entertainers, and it was one of the most moving presentations of the night.

Later on I wasn’t sure why Charlize Theron was chosen to present the Cecil B. DeMille Award to Tom Hanks, but it became clear when she discussed being overwhelmed during her audition for one of her earliest film roles: “That Thing You Do!” (1996), which Hanks directed. Her anecdote about Hanks giving her time to settle down was touching, but it was nothing compared to the moment when Hanks told her she belonged in the same category as his other screen partners like Meryl Streep, Julia Roberts and Sally Field. She absolutely melted, sinking down onto the stage at the compliment. We should all have a cheerleader like Hanks.

Other little moments enlivened the show. No awards ceremony can contain Jason Momoa‘s muscles, which were the talk of Twitter when he was seen in the audience bare-armed without his jacket while “Succession” star Brian Cox made his way to the stage to accept Best TV Drama Actor.

Elsewhere, child actor Roman Griffin Davis (“Jojo Rabbit“) was living his best life while his category was announced. He lit up at an offhand joke by presenters Chris Evans and Scarlett Johansson about his Halloween costumes, and he raised his arms in the air triumphantly when Best Film Comedy/Musical Actor winner Taron Egerton (“Rocketman”) praised him from the stage. I want to bring the Notorious RGD’s infectious energy to everything in life; it was the exact opposite of Ricky Gervais‘s persistent cynicism.

Reliable awards presenter Will Ferrell enlivened what could have been a bland bit where he praised Pierce Brosnan‘s handsomeness — and smelled him. Another funnyman, Sacha Baron Cohen made a pointed jab at Facebook when he introduced Mark Zuckerberg as a “naive, misguided child who spreads Nazi propaganda and only has imaginary friends” — he was really introducing a clip from the aforementioned “Jojo Rabbit,” which made the joke brilliantly pointed.

And only Tiffany Haddish — presenting Best TV Movie/Limited Series alongside Salma Hayek — could announce “Chernobyl” and make it sounds like a party destination you absolutely want to go to.