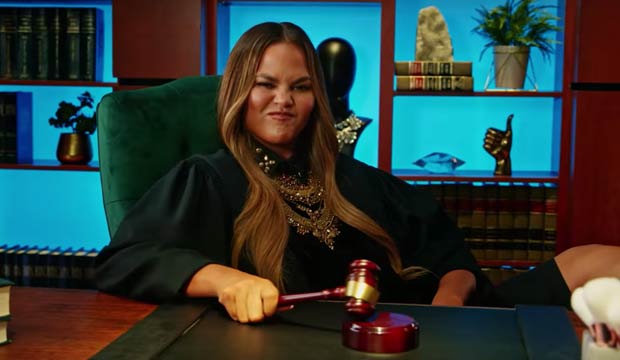 Quibi – allegedly pronounced “kwibby” – is the latest service to enter the streaming game, and its strategy is unique. The streamer’s mobile-only content is designed to be consumed in small chunks, or “quick bites,” but unlike its competitors such as YouTube, the shows on Quibi have big name stars and production values similar to what you’d find on a major network. Creators Jeffrey Katzenberg and Meg Whitman are betting that in our modern society of short attention spans there is an audience for well-crafted entertainment that can be watched quickly while on the go. Interested in giving it a try? We’ve got a list of Quibi shows that we’re most excited about.

It’s Judge Judy, except the judge is model and Twitter personality Chrissy Teigen. Who doesn’t want to watch John Legend’s spouse give legally binding judgements to petty small claims cases? With Teigen’s mother “Pepper Thai” Teigen cast as the bailiff, the show is clearly aiming for the sort of over-the-top absurdity that characterizes the best reality TV.

With housing prices these days, who wouldn’t consider taking a sweet deal on a new home that just happened to be the location of a grisly murder? In this creepy twist on a home renovation show, hosts Mikel Welch and Joelle Uzyel do their best to exorcise lingering spirits by remodeling rooms. It’s a light and silly idea that works better in a short timespan.

“Singled Out” began in 1995 as a dating show where up to 50 singles all competed for one contestant. This new version is updated for 2020, with singles representing all genders and sexualities. The dating reality show is another format that does well in short chunks.

Like its competitors, Qiubi will have movies, but they are broken up into “chapters.” This has a lot of potential for some interesting story construction, especially for a thriller like “The Stranger,” which relies on suspense and cliffhangers. Dane DeHaan plays a sociopathic passenger trying to kill a poor Uber driver (Maika Monroe) in one of the streamer’s first “Movies in Chapters.”

“Unbreakable Kimmy Schmidt” star Tituss Burgess hosts this bizarre cooking show, where different dishes are shot out of a cannon at amateur chefs, who then have to do their best to recreate the dish themselves. It’s extremely silly and maybe just a little bit demeaning to the contestants, as all good unscripted shows are.

Quibi’s many reality TV offerings seem to be shooting for outrageousness over anything else, and “Gayme Show!” is no exception. Hosted by Dave Rogers and Matt Rizzoni and based on their live show, the competition series pits two “straights” against each other in competitions to prove who can be more gay, with help from celebrity “life partners” such as Ilana Glazer, D’Arcy Carden, Trixie Mattel, Jon Lovett and Rachel Bloom.

Former “RuPaul’s Drag Race” winner Sasha Velour gets the chance to bring her widely beloved monthly revue “NightGowns” to the small screen. The series revolves around the backstage drama as Velour and her ensemble attempt to create dramatic and astonishing lip-syncing drag performances. “Drag Race” fans won’t want to miss this.

MTV’s hidden-camera sensation is back in bite-sized form. Ashton Kutcher has been replaced with Chance the Rapper, and the celebrity cast includes Lil Nas X, Adam Devine and Migos. “Punk’d” is a perfect fit for a short-form series, and Chance’s natural charisma has never been properly utilized like this before.

In 2015, 23-year-old Jasiel Correia was elected mayor of Fall River, Massachusetts, and he served two terms before being arrested on fraud and extortion charges. This documentary series, executive produced by Mark Wahlberg and directed by award-winning Canadian filmmaker Brent Hodge, chronicles the young politician’s rise and fall. It’s a fascinating story no matter what format it comes in.

Funny or Die dips its toe into the Quibi game with “Agua Donkeys,” based on a short film of the same name. The trailer gives off strong “Letterkenny” and “Napoleon Dynamite” vibes with its dry humor and focus on bizarre small town culture. Unique comedy is an extremely good fit for the streamer, and hopefully we’ll see more shows like this in its future.

Idris Elba must have picked up more than a few tips from his “Hobbes and Shaw” stunt drivers, since he agreed to compete in this car stunt show with road rally star Ken Block. Block himself is no stranger to short form video, as he starred in the popular “Gymkhana” series on YouTube, where he raced a rally car around incredibly tricky courses and through cities. This is the kind of show that might have been padded out to a full hour on a traditional network, so it’s refreshing to see it cut down to only the good parts.

4. When the Street Lights Go On
Available Now

With shades of “Twin Peaks,” this series revolves around a murder in a small town that brings to light a hidden darkness. The show is based on a Black List script that had been floating around in production hell for years before being optioned by Quibi. It’s a story that has been told before, but the shortened format freshens things up.

An innocent man is once again accused of a crime he didn’t commit and forced to go on the run while he clears his name in this update of the classic TV show and Harrison Ford blockbuster. Boyd Holbrook is the titular fugitive in this version, and Kiefer Sutherland is the relentless cop on his tail. It’s not an original premise, but the unique “Movies in Chapters” format is a perfect fit. It harkens back to the classic adventure film serials of the ‘40s and ‘50s, where each installment ends on a cliffhanger with our hero in peril with no hope of escape.

Will Forte and Kaitlin Olsen star in this comedy series about two wannabe house flippers who discover a pile of money in one of their potential homes. They use the cash to make their dream house, but unfortunately it belongs to a nefarious drug lord. The cast is great – we love to see two comedic talents like Forte and Olsen play off each other.

“Reno 911!” is back after eleven years, and judging by the clip above it hasn’t changed a bit. The show was always more of a loosely connected series of skits than a full 22 minute story, and it should fit well into 10-minutes-or-less chunks. The whole cast is returning for the new season, including co-creators Thomas Lennon, Robert Ben Garant and Kerri Kenney-Silver. No premiere date has been announced, but we hope it’s soon as this is one of the biggest draws for the service.