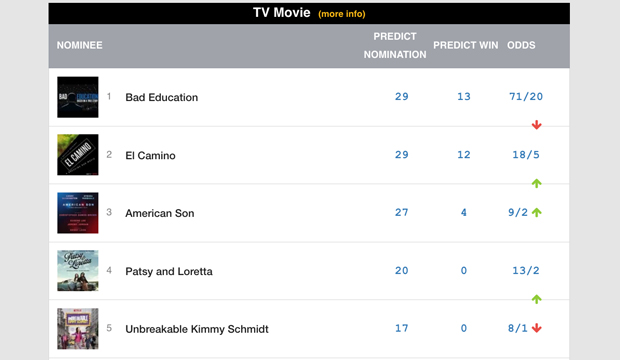 Talk about a nail-biter! Gold Derby’s Emmy Experts from major media outlets are almost evenly divided between “Bad Education” and “El Camino” when it comes to Best TV Movie. All 29 Emmyologists believe both programs will earn nominations on July 28, so that’s no help. But when it comes to the winner, 13 pick the HBO telefilm about a true-to-life high school scandal while 12 choose the Netflix spin-off about a fan-favorite “Breaking Bad” character. The other four Experts predict “American Son,” Netflix’s adaptation of the Broadway play.

“Bad Education” just debuted on April 25, so it’s still fresh in the minds of Emmy voters. Hugh Jackman plays a by-the-books Long Island superintendent who gets embroiled in an embezzlement scandal thanks to his assistant’s (Allison Janney) illegal spending habits. HBO is no stranger to winning Best TV Movie, including recently when it went four-for-four: “Game Change” (2012), “Behind the Candelabra” (2013), “The Normal Heart” (2014) and “Bessie” (2015).

“El Camino: A Breaking Bad Movie” streamed back on October 11 and continued the story of Jesse Pinkman (three-time Emmy winner Aaron Paul) from the parent series. It won Best TV Movie at the Critics’ Choice Awards, with supporting actor Jesse Plemons also being nominated. Even though the telefilm was strangely snubbed at the Golden Globes and SAG Awards, it did receive bids at the Directors Guild, Producers Guild and Writers Guild.