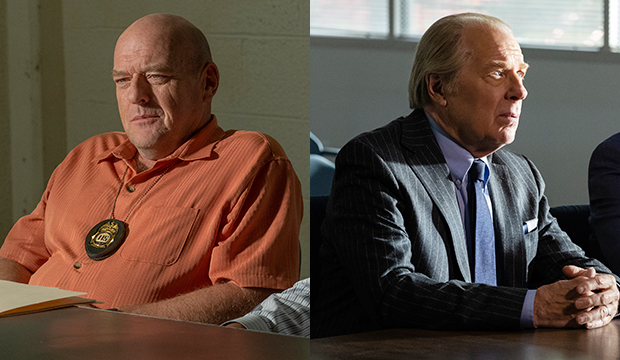 “Breaking Bad” scored seven nominations in Best Drama Supporting Actor during its run, but sadly none of them were for Dean Norris. He may finally get recognized for his portrayal of Hank Schrader this year in another category and via a similar path of that of another star in the “Breaking Bad”-verse.

Norris is contending in Best Drama Guest Actor after reprising Hank in two episodes of “Better Call Saul” this season — the first time we’ve seen Hank back in the flesh since his gut-wrenching death after that iconic line — “My name is ASAC Schrader, and you can go f— yourself” in the iconic “Breaking Bad” episode “Ozymandias.” If he makes it in, it would not be unlike Michael McKean, who was snubbed in supporting in 2017 for the third and his final season of “Better Call Saul,” in which Chuck dies, but bagged a guest bid last year for his appearance in the Season 4 finale “Winner.”

McKean, who received raves for his Season 3 performance, notably in the standout hour “Chicanery” — “Vulture” declared him the best actor on TV — was omitted in a field of seven that included his co-star Jonathan Banks, who has his own bad luck in the supporting category. That was a competitive race that saw four stars from four hot first-year shows shortlisted: winner John Lithgow (“The Crown”), David Harbour (“Stranger Things”), Ron Cephas Jones (“This Is Us”) and Jeffrey Wright (“Westworld”); the other two were former nominees Michael Kelly (“House of Cards”) and Mandy Patinkin (“Homeland”).

McKean returned as Chuck in two Season 4 flashbacks in “Piñata” and “Winner.” His guest nomination for the latter was widely seen as a make-up bid for his egregious snub (he lost to Bradley Whitford for “The Handmaid’s Tale”).

Like Chuck, Hank also returned to us in the past, though not in flashbacks since, you know, “Better Call Saul” is set years before “Breaking Bad.” Norris appeared in the third and fourth episodes, “The Guy for This” and “Namaste,” respectively, along with Steven Michael Quezada as Hank’s partner/buddy/punching bag Gomie, as the duo arrives to interrogate Krazy-8 (Max Arciniega), who’s represented by Jimmy (Bob Odenkirk). The second Hank slapped his DEA badge on that glass window, it was like an old friend dropping by and no time had passed.

What’s more, it was a Hank we haven’t seen since very early in Season 2 of “Breaking Bad.” Though he found renewed purpose in the second half of the final season after realizing Walt (Bryan Cranston) was Heisenberg, the majority of Hank’s arc was colored by the PTSD he suffered after killing Tuco (Raymond Cruz) in Season 2 and getting partially paralyzed after the Cousins (Daniel and Luis Moncada) nearly killed him in Season 3. He became depressed, bitter, withdrawn, and started collecting minerals.

The Hank we see in “Better Call Saul” is a rewind to his prime — the Season 1 agent who was confident, over-the-top, loud, and had swagger for days. Norris effortlessly slipped back into the shoes of that indomitable Hank, serving a nice reminder of not only his range but the evolution of the character who could’ve been a stock macho blowhard, but proved to be a good, decent and complicated man who died honorably. Norris was snubbed in 2014 for that final installment in favor of his co-star Aaron Paul, who won a then-record third supporting statuette, Jim Carter (“Downton Abbey”), Josh Charles (“The Good Wife”), Peter Dinklage (“Game of Thrones”), Patinkin and Jon Voight (“Ray Donovan”).

The guest categories are less competitive than the regular acting ones, but they’re also more unpredictable and more prone to name-checking (see: Margo Martindale winning for sipping coffee on “The Americans”), which means you should keep your expectations measured. Norris does have a few factors in his corner. Season 5 was by far “Better Call Saul’s” best and most acclaimed outing yet, and the show has been a consistent nominee during its run. Emphasis on “nominee”: At 0-32, the prequel is still awaiting its first win and at this point feels like a show voters respect and like but don’t passionately love, or at least not in the way they loved “Breaking Bad.” But McKean’s breakthrough last year is notable for two reasons: It was the show’s first acting bid outside of drama actor (Odenkirk) and drama supporting actor (Banks, Giancarlo Esposito), and McKean was the first performer to be nominated whose character didn’t originate on “Breaking Bad.”

Obviously the latter does not apply to Norris, but McKean’s nomination suggested that voters are watching the show and not just mindlessly checking off their favorite “Breaking Bad” stars. If they are, though (and let’s face it, some probably are), that, of course, helps Norris. Who doesn’t want justice for Hank?