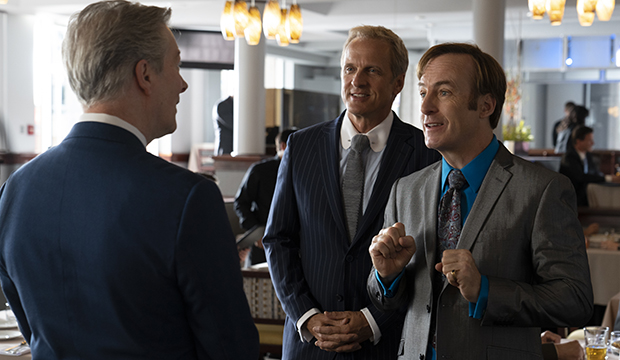 “From the beginning … I think all our hopes and dream was be able to tell the whole story of this story of this guy, Jimmy McGill [Bob Odenkirk] and Mike Ehrmantraut [Jonathan Banks] and Kim Wexler [Rhea Seehorn], and tell this story and make it a complete story from beginning to end. And I’m happy to be able to say that we’re going to be able to do that — because thank God for AMC and Sony — because they picked us up for Season 6,” Gould said during the show’s panel.

The final season will consist of 13 episodes, a bump up from the show’s usual count of 10 per season, and will air in 2021. Season 5 premieres next month.

Season 4 concluded with Jimmy, after regaining his law license, deciding to practice law as the persona we first met him: Saul Goodman. Gould, of course, did not reveal his game plan for the final season, which would presumably lead into the start of “Breaking Bad.” But he shared that he did not have an ending in mind during most of the prequel’s run.

“It’s hard to talk about the end because we haven’t even opened our writers’ room for the last season. The truth is we didn’t have much of an idea of it either,” he said. “For the first, I’d say, four seasons, it was very foggy. And then during the breaking of Season 5 … I think the fog started to lift a little bit. The headlights started to reach that much further down the road, and we started to see where we think it ends. And I have to say, none of it is what I would’ve expected when we started.

“When this season is over, I think you’ll have a better understanding of where this is all going,” he teased.

“Better Call Saul,” which has been nominated for 32 Emmys but has yet to win one, will run for one more season than “Breaking Bad” did, though “Breaking Bad’s” fifth and final season was split into two parts.

As the end of “Better Call Saul” nears, that must mean Walter White (Bryan Cranston) and Jesse Pinkman (Aaron Paul) must pop up somehow, right? “I would love to work with Aaron and Bryan on this show,” Gould said, adding that the two do not appear in the fifth season.

But two familiar faces who will be in Season 5 are your favorite DEA agents. Yup, Dean Norris and Steven Michael Quezada will appear in two episodes, reprising their fan-favorite roles as Hank and Gomez, respectively. “[Episodes] 3 and 4 are especially close to our hearts, because we have some of our ‘Breaking Bad’ family returning,” Gould said. “Dean Norris as Hank Schrader comes back in Episodes 3 and 4, and Steven Michael Quezada, and they are great. Working with Dean and Michael was the highlight of the season. … Hopefully you will love those two episodes as much as we do.”

Also appearing in Season 5 is the late Robert Forster, who will reprise his role as Ed the Disappearer, who helped relocate Walt to New Hampshire in the penultimate episode of “Breaking Bad” and Saul to Omaha. Forster passed away at 78 on Oct. 11, the day the “Breaking Bad” film “El Camino” premiered on Netflix, in which he also made a brief but memorable return to relocate Jesse to Alaska. The Oscar nominee’s “Better Call Saul” appearance was filmed during the production of “El Camino,” Gould revealed, adding that there was a plan involving Ed moving forward on the show.

“I was so excited to get him into this episode,” Gould gushed. “We didn’t think we could possibly put that location back together for that little scene. While Vince was shooting ‘El Camino,’ I got a call from [producer] Melissa Bernstein … so that scene was actually shot during the production of ‘El Camino.'”

“Better Call Saul” returns with its fifth season on Sunday, Feb. 23 at 10/9c on AMC. It moves to its regular Mondays-at-9 timeslot the following night.