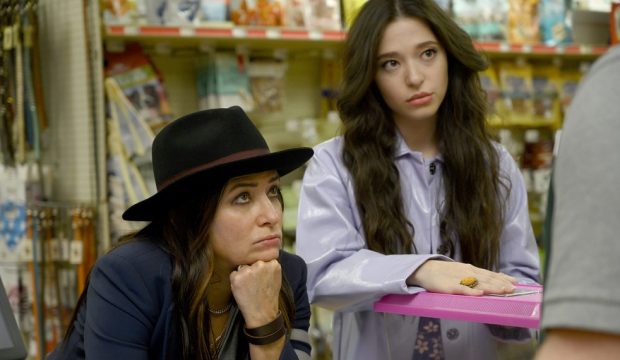 Amazon’s “The Marvelous Mrs. Maisel” is still pretty much at the top of its game in its third season. Then there is the once-cult-sitcom-turned-major-player “Schitt’s Creek,” which gathered some impressive buzzy momentum in its sixth and final season. Gold Derby’s combined odds suggest that the Best Comedy Series Emmy battle will boil down to a race between these two popular shows.

But hold your trophy horses, suggests one of our Top 24 prognosticators. Mario Gomez, who got one of the highest scores predicting last year’s Emmy nominations, is placing his bet on another sitcom to win — the fourth season of FX’s  darkly humorous “Better Things,” which stars the show’s co-creator Pamela Adlon as divorced actress Sam Fox, who is raising her three daughters on her own in Los Angeles.

The sitcom’s leading lady has been Emmy-nominated twice for Best Comedy Actress in 2017 and 2018, but “Better Things” has been ignored in other eligible categories thus far. One thing that distinguishes her show is the number of actors and other notable (and Emmy-friendly) guest stars that popped up on screen — often as themselves — including Julie Bowen, Bradley Whitford, Lenny Kravitz, David Duchovny, Zach Woods, rocker Joe Walsh, Sharon Stone, Molly Shannon and even Randy Rainbow.

Adlon is not Emmy-less, however. She won a trophy for voicing Bobby Hill on the animated comedy series “King of the Hill.” She also gathered four Emmy nominations for her work on “Louie” as a writer, producer and actress. So we know the academy likes her. And season four of her show has a Rotten Tomatoes score 0f 100%. That is more than Season 3 of “The Marvelous Mrs. Maisel,” which got a still stellar 89%, while “Schitt’s Creek” Season 6 earned 100% as well.

Among the critical valentines sent to “Better Things” in its 4th go-round? Ben Travers at Indiewire: “While Sam Fox stands tall as one of television’s best characters, Adlon has created a vehicle around her lead unlike anything else you’ll see.” Matt Roush at TV Guide: “Landing acting gigs at 50 is no joke, and yet there are plenty of laughs as Sam wrangles three headstrong daughters able to whipsaw from tender affection to bristling hostility in a blink.” Matt Zoller Seitz at Vulture: “The sneaky power of this series lies in Adlon’s determination to do what she’s been told not to do and point her camera at parts of the world that commercial television rarely notices.” Alexandra Schwartz at New Yorker: “The banality, comedy, frustration and weirdness of daily life in this functionally dysfunctional matriarchy. I can’t get enough.”

Adlon herself is ranked at number four in our overall Best Comedy Actress predictions-with 9/1 odds, behind Catherine O’Hara of “Shitt’s Creek,” Rachel Brosnahan of “The Marvelous Mrs. Maisel” and Christina Applegate of “Dead to Me.” As for the show in the top category, “Better Things” sits in ninth place for Best Comedy Series, sandwiched between newcomer HBO’s “Run” and the final season of ABC’s “Modern Family.” And we just learned that the academy is expanding Best Comedy Series to eight nominees, so “Better Things” is knocking on the door.

We will see when Sunday, September 20 arrives — the just-announced date of when the 72nd Emmy Awards will be held on ABC with Jimmy Kimmel — as host if our Top 24 User is onto something or not.

Who do you think will be nominated? Make your Emmy predictions so that Hollywood insiders can see how their shows and performers are faring in our odds. You can keep changing your predictions as often as you like until the nominations announcement on July 28. And join in the fun debate over the 72nd Primetime Emmy Awards taking place right now with Hollywood insiders in our television forums.