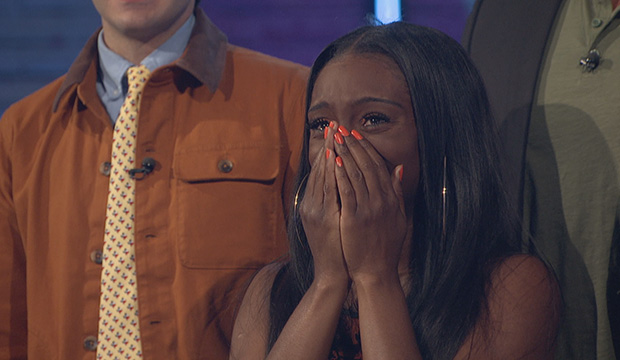 We caught up with the three-time player to chat about her surprising (to her) AFP victory, why she voted for Cody Calafiore to win over Enzo Palumbo, why she wouldn’t have voted for Nicole Franzel this time, and if the Season 18 alums have hashed out the vote fiasco earlier in the season when Nicole pinned her vote to evict Ian Terry on David Alexander.

Gold Derby: You looked surprised to be even in the top 2 for AFP. Who did you think was going to be up there?
Da’Vonne: I don’t know who was going to be up there, but I knew for sure Tyler [Crispen]. The other two, I had no idea. Janelle [Pierzina], of course, but then I don’t really know. Speaking of what I know as far as how this usually goes, African-Americans are not usually in the top three, so to be in it and then the top two and then for Julie [Chen Moonves] to say my name that I won, my mind was blown genuinely. I hope it did show in my face because I was truly shocked. Truly shocked. … I’m grateful. Thank you I don’t feel is big enough. My heart is full. That’s all I can say.

Gold Derby: You wanted to make history as the first Black winner of the game and you didn’t do that, but you still made history with this. How does that feel?
Da’Vonne: It feels amazing. It lets me know that I was heard and that my time in the house was not in vain. Though I didn’t get the big goal, like you said, there’s still history that was made and I’m grateful to be a part of that. That feels good.

Gold Derby: Going back to the finale, it was 9-0 for Cody. Did you think about voting for Enzo at all?
Da’Vonne: I was really rooting for Enzo. I feel like all of them that were left in final four, they all suck at jury management. [Laughs] They had burned everybody in the jury house in some capacity. However, of those four in my mind, at the time, Enzo was the lesser of all of those evils. So I was like, “OK, I’m rooting for you. I want you to get this thing done.”

Then when he wins the HOH that sends Christmas [Abbott] out, you had the opportunity to take “never nominated” out of Cody’s resume and you didn’t even take that. I get you trying to be loyal, but we’re at the point of being cutthroat. That ain’t your friend right now; that’s the person you’re competing against. You need to put his butt on the block so that we can at least say, “Well, Enzo nominated him.” I’ve always said Cody had a very clean record. I was always rooting for Enzo, but Cody’s record and resume was the cleanest. So whoever clipped him was the one that I felt, “Hey, watch this person.” But nobody took a shot, so give the man his check!

Gold Derby: It seemed like you guys weren’t bitter. We’ve had some bitter juries the past few years. Do you think it’s because you guys have played this before?
Da’Vonne: I do believe there were some people who were bitter towards Cody, but this season, for whatever reason, a lot people were on “I don’t want America to look at me a certain way, so I have to vote [this way] because I don’t want America to think I’m bitter.” So they would just talk mess when the cameras were off, OK? [Laughs] So when we were in front of the cameras, it was, “Oh, Cody is playing a great game!” Like two seconds ago, you were trashing him and saying you’re hoping he gets evicted, but whatever! So him getting a unanimous vote was not surprising at all.

Gold Derby: So if Nicole had won the final HOH and evicted Cody, would you have voted for her to win again?
Da’Vonne: No! And I say that and I don’t care about people thinking I’m bitter. You know me, I’m me all the way through — organically, unapologetically Da’Vonne. She would’ve never gotten my vote this season, not for the way I felt she did me this season. It was unnecessary.

I know a lot of people think, “Oh, it was a game move,” and I want to be very clear: Her flipping her vote and pinning it on David, I get that from a strategic standpoint. However, me and her were on some personal stuff. That’s the problem. I allowed my personal feelings for her to come into the game, so when she and I began to establish this personal relationship, I’m like, “Girl, please just give me this as Da’Vonne’s friend.” There’s so much to that story, there’s so many different layers, and I’m just like, “Girl, I cannot.” I couldn’t. But I would’ve been like, “Yeah, y’all vote fo her. Give her her cake, but I won’t.”

Gold Derby: Have you talked to Nicole since you guys have been home about her framing David and the vote situation?
Da’Vonne: No. I haven’t talked to anyone. I’ve been away for three months and I’m a mother, so coming home, it’s been all about my child. I’m not really interested in any of these houseguests and what they’re up to. The only two people where I’m genuinely like, “Hey, I wanna talk to you after I get settled” are Bayleigh [Dayton] and Ian. That’s it. Everybody else, I’m just like, “Eh, we’ll cross that bridge when we get to it. But I do love you and I forgive you with the love of the Lord, but that’s about it.” That’s all you’re getting from me.

Gold Derby: We’ve since found out there was some drama between you and Kevin [Campbell] and David in the jury house. What can you tell us what happened in there between you guys?
Da’Vonne: See, that’s a lot of tea and I’m saving that tea for my YouTube video. [Laughs]

Gold Derby: OK, well, what can you tease then?
Da’Vonne: What I will say is that when I said we weren’t friends anymore, people took that as “Oh, my God! They hate each other!” We do not hate each other. There is no bad blood. Sometimes you just realize, these particular people I don’t want in my space and in my bubble to take away from my positive energy. And I don’t want that. There’s no rule that says “after you play ‘Big Brother,’ you have to be friends.” No, we don’t! And I think that’s OK! And I don’t think people should be offended or upset that we’re not talking. Everybody doesn’t have to be friends, so that’s where we’re at with that. That’s no bad blood, there’s none of that. We just — you know, no, thank you.

Gold Derby: How different do you think this season would’ve gone had you won that HOH and gotten that question right?
Da’Vonne: Oh! Week 5 haunts me in my sleep! You don’t even know! It would’ve been completely different because I would’ve nominated Cody and Tyler. I just wanted to see what was going to happen. When you come into a game, especially an all-stars season, you get the threats out — allies or not, I don’t care. Cody and Tyler on the block on eviction night? Bye! We vote ‘em out. But you have to be able to take those shots, and I think outside of me, the only person that early in the game willing to take those shots was Janelle. It sucked because nobody else was willing to do it. I wish I could’ve done it.

Gold Derby: How frustrating was it to play and then get voted out in the middle to see this one alliance just run the whole game basically and there was no shakeup?
Da’Vonne: It was definitely frustrating because I’m a fan of the show before anything, before I’m a player. As a fan and a viewer, we don’t like to see that. We don’t like to see one alliance take the whole thing. We like to see the conflict and the chaos. We don’t like house votes, unanimous votes — that’s not fun to watch. And so I’m watching this happen and I’m like, “Oh, my gosh! Something has to be done.” But in order to do something, you have to win power, and I think that was the downfall with the people who were not in that alliance. We could not win power. That’s why Week 6 was so good! David used his power. Couldn’t be touched. I used my Veto. Couldn’t be touched, Kevin couldn’t be touched. It was great!

Gold Derby: That was the only the second time the Veto was used this season. It was only used twice and you didn’t even use it on yourself.
Da’Vonne: That’s right! When I needed it, I couldn’t win it for me. [Laughs] But I used it. It was a good week.

Gold Derby: What are some things you’ve learned since you’ve been home about the season that have surprised you?
Da’Vonne: These houseguests were foolish! They were doing a lot of things that are not wise and there was a lot of ignorance in that house. Maybe instead of saying Da’Vonne’s speeches are too long, you should’ve been sitting there listening because you probably could’ve been educated and you wouldn’t have been making some of the dumb comments and some of the dumb mistakes inside the house. And now a lotta y’all got a lot of fire lit under y’all, and there’s nothing you can do about it. Once you say it and it’s put into the universe, it’s out there. You can’t take that back, so maybe you should’ve been listening and learning instead of talking.

Gold Derby: Are you gonna play for a fourth time and win the big one finally?
Da’Vonne: Oooh. We’re gonna talk to the Lord about that. I don’t know if I can do another stretch. This was a shortened season. A regular season for us is 99 days; this one was shorter. So I don’t know.

Gold Derby: I think you would qualify for “Celebrity” if they ever do that again. That’s like 30 days.
Da’Vonne: I’m set! What I really wanna do is “Survivor.” It’s 36 days, I’ll be gone, knock that out. I’ll be OK with that. I think that’s what I wanna do.