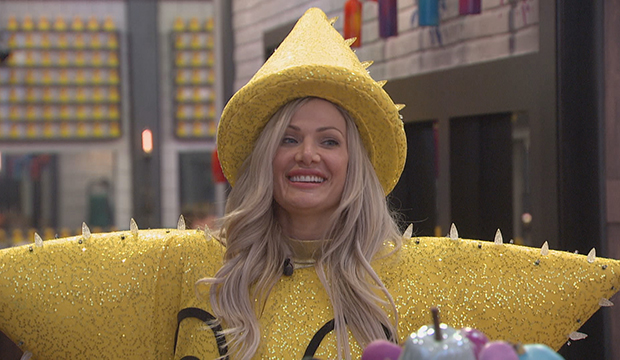 Sunday’s episode of “Big Brother 22” was a win for any fan of old school “BB” as Kaysar Ridha won the Safety Suite comp and named his fellow two-time all-star Janelle Pierzina as his plus-one, making them safe for the week and sending Cody Calafiore‘s nomination plans up in flames. Since the Safety Suite pass can only be used once over three weeks and Kaysar saved her, it seems like Janelle wasted hers, but that’s not the case.

Though it was not mentioned in the episode, Janelle revealed on the live feeds after the comp on Thursday that there was a time limit of 25 minutes. That means if only one person — Kaysar — had gone for it, he would’ve just played against the time limit, and if he had timed out, he wouldn’t have gotten safety. In other words, one person playing the comp does not guarantee a win.

Janelle also told Christmas Abbott on the feeds that if she and Kaysar had timed out, neither would’ve gotten safety; however, Kaysar later told Janelle that he was told that in that event, they would’ve gone to a tiebreaker and one of them still would’ve won.

SEE ‘Big Brother 22’ episode 2 recap: Cody makes nominations, and what the heck is the Safety Suite?

But that’s neither here nor there. The point is, had only Kaysar done it and timed out, both he and Janelle would be on the block right now as Cody had planned instead of Kevin Campbell and Keesha Smith. In hindsight, it’s easy to say that Janelle should’ve saved her pass for a future week since they were the only ones to play, and Kaysar crushed it (7:55 to 16:36) and chose her as his plus-one — but they didn’t know any of this when they decided to swipe their passes at, as it appeared, literally the last second. Both of them playing ensured that one of them would win. Of course, they didn’t know what the comp was or what the rules were when they decided to play, but you could surmise that Janelle felt compelled to play when Kaysar walked by not just because she felt unsafe, but because her playing would guarantee one of them a victory.

It was a good move in the moment by two “BB” legends who picked up on Cody’s lame attempts at deflection faster than his time in the HOH comp.