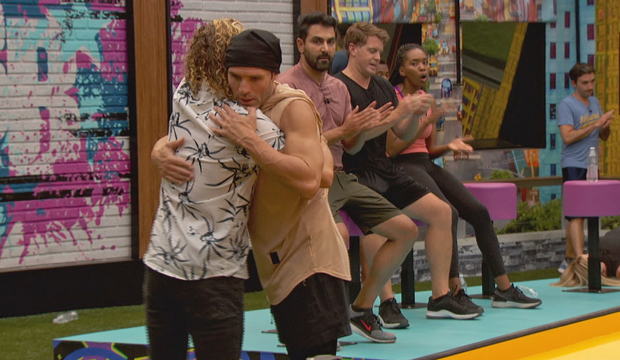 Dude! Things have gotten very bromantic on “Big Brother” after Cody Calafiore, Memphis Garrett, Tyler Crispin and Enzo Palumbo dominated the first four Head of Household competitions of Season 22. The men have been picking off women one by one, but even though All-Stars Keesha Smith, Nicole Anthony and Janelle Pierzina were the first three players sent packing, the ladies remaining in the house don’t seem overly concerned. Is there still time for them to band together and turn things around? Or are we watching the bro-iest season in “BB” history unfold?

SEE‘Big Brother’s’ most beloved (and hated) showmances: Where are they now?

It’s no secret that each of the bros controlling the house this season have long, successful track records with all-male alliances. Cody and Memphis are the losing halves of two of the most dominant duos ever. Cody teamed up with Season 16 winner Derrick Levasseur to form the Hitmen and Memphis joined Season 10 champ Dan Gheesling to create the Renegades. Enzo was one of the masterminds behind Season 12’s powerhouse alliance, “The Brigade,” which led him to third place behind his co-conspirators Hayden Moss and Lane Elenburg.

Heading into All-Stars, Enzo pledged to play a different game noting that his downfall in “BB12” was aligning with more physical threats. Alas, it seems old habits die hard. Within minutes of entering the house he was smitten by Tyler, gushing, “My sister loves you bro, she loves you bro.” Then by the end of week one he had pledged to go to the end with Cody, a fellow “Jersey boy.” Within the first four episodes we heard these grown men refer to each other as “dude” or “bro” no less than 15 times (and that was in the edited episodes). The bromance was on.

So far the women seem to be letting the boys have their fun, but there is still time to turn things around. The question is, do they want to? Chistmas Abbott, Dani Briones and Nicole Franzel have positioned themselves well within the house, but each seems more loyal to at least one of the men than to each other. Only Da’Vonne Rogers & Bayleigh Dayton and Dani & Nicole have what appear to be unbreakable female alliances. But even if they don’t all want to work together, there are non-bro options at their disposal. Kevin Campbell, Kaysar Ridha and Ian Terry have all failed to penetrate the brotherhood, and it seems likely one of them will be the first male evicted on Thursday, September 3.

Do YOU think there is any way to derail the dominant bromance forming this season? Or is Cody, Tyler, Enzo or (less likely) Memphis destined to win Season 22? Sound off in the comments with your thoughts and let us know who you want to see take home the $500,000 prize.