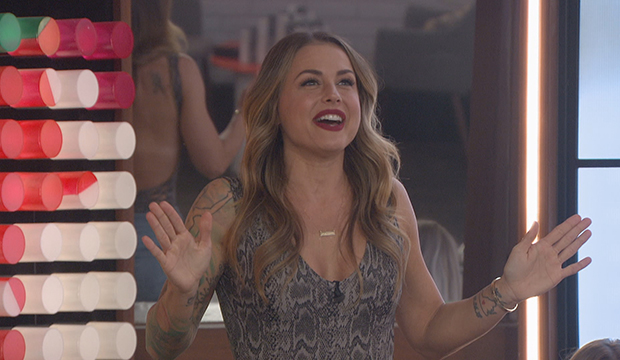 Christmas is coming early to the juror house. Christmas Abbott became the penultimate “Big Brother 22” juror on Thursday, getting the boot after Cody Calafiore cast the sole vote to evict. It was the third straight week on the block for Christmas after she and Tyler Crispen dared to vote to evict Nicole Franzel during the triple eviction, and the Season 19 alum was doomed the second she lost the final four Veto. But she departed with a bang, telling Enzo Palumbo in her speech, “Congratulations, you got third place.”

We caught up with Christmas at the jury house to find out why she decided to snap, why she thinks her dissenting vote to cut Nicole was a “cover-up” to target her, and the joys of aggressively waxing Cody’s eyebrows.

Gold Derby: Why did you decide to call out Enzo in your speech and say he’ll finish in third again?
Christmas: I decided to call out Enzo in my speech, letting him know he was gonna finish in third, because 1) he loves it when I pop off and say things as they are. And let’s be real — him going into final three with Nicole and Cody — he wasn’t going to break that bond with Nicole and Cody. I just really see him getting third and I just thought I’d send him off with a little goodbye present.

Gold Derby: Enzo said he was campaigning on your behalf. How hard do you think he fought for you?
Christmas: Enzo was claiming that he was campaigning on my behalf, but I just knew in my heart — and a lot of other things telling me some signs over the weeks — that was not actually accurate. And honestly, if he had been campaigning, it was doing more damage than good, so I had to take everything into my own hands and make some pretty bold speeches.

Gold Derby: Your HOH was full of drama between Tyler wanting to be backdoored and your fight with Da’Vonne [Rogers] and Bayleigh [Dayton]. What kind of impact do you think that had on your game?
Christmas: So my HOH was a little unprecedented — Tyler wanted to be backdoored, me, Bayleigh and Da’Vonne not seeing eye to eye on what gameplay is vs. personal connection — and I honestly feel like I came out of my HOH in a really good position in the house, which is pretty remarkable. So I don’t think that it had a huge impact that it was negative on my game. It just was an interesting week.

Gold Derby: You were in the end with people who had multiple final twos and threes. Do you wish you had made more side deals?
Christmas: So I’m in the end with people who had multiple deals of twos and threes, and I had a huge alliance, the Committee, I had the Carolinas [with Tyler], I had Enzo, I had me and Memphis directly, we had the Wise Guys, I had one with Nicole. I had a lot of side deals as well, but ultimately, I had my alliance, but at some point I knew it was just gonna be me fighting against the rest. And I was hoping that the side deals that I made were strong enough to get me further, but they weren’t, and that’s OK. So I don’t wish that I had made more because when people make too many, they get themselves in trouble fast.

Gold Derby: How much pleasure did you take in waxing Cody’s eyebrows?
Christmas: I have to admit that waxing Cody’s eyebrows was the highlight of the season for me! Because he had been targeting me and I know he says it’s because of my vote for Nicole, but I didn’t vote for him to leave. So it was really nice to inflict some pain on someone that was coming after me.