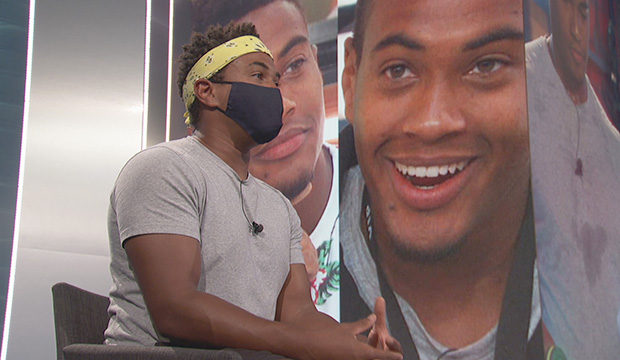 The third time was the charm for Memphis Garrett on “Big Brother 22.” Pressed about David Alexander being a rookie on an all-stars season, the Season 10 runner-up had made it his mission to evict him since his first HOH in Week 2. He finally got his wish when the Season 21 alum was booted 3-2 during the second of Thursday’s triple eviction.

And so ended one of the most, uh, unique runs on “Big Brother.” David, who was banished on Day 1 last season, did a number of head-scratching things, like taking the $10,000 instead of going for the Veto this week, and telling his own ally, Da’Vonne Rogers, to chill out when she was gaming on his behalf (which later led to her thinking he flipped the vote on Ian Terry when it was Nicole Franzel). But equally head-scratching was Memphis’ disdain for him. Why does he think he targeted him? See what he says in our exit interview below.

Gold Derby: Why do you think Memphis has been targeting you since Week 2 instead of using you as an ally or a shield?
David: Me and Memphis didn’t talk much or tried to engage with him. I don’t truly understand. I think maybe it had to do with my inexperience. Maybe he didn’t respect the fact that I was considered an all-star with only having one day before banishment last year. It could be a number of things, but I’m not a fan of him. He always targeted me. I wish we could’ve had more conversations, but it’s “Big Brother.” It’s part of the game, I guess.

Gold Derby: You perplexed a lot of people with some of the things you said and did, like taking the $10,000. Is there anything you said or did that you think hurt your game the most?
David: I would say the [three] things that hurt my game the most was lying about using the power, going for the $10,000, and trying to keep my alliances a secret to people I wanted to work with, like Cody, Tyler and Da’Vonne. I was throw in between all of them, trying to get information out … and that really put me on the fences.

Gold Derby: This was your first time actually playing the game. If you could play again, what would you do differently?
David: If I could play again, I wouldn’t play with an all-star cast. I wouldn’t play with people who were very, very experienced in this game and with the comps, and just understanding the dynamics week by week as the house gets smaller. If I could play again, I would be more prepared, watch more content — seeing how alliances come together, break apart and come together throughout the season to get a better understanding on that format.

Gold Derby: You had goalposts you wanted to hit as a Black player in this game. How frustrating is it to leave directly after Da’Vonne and Kevin [Campbell] and a couple weeks after Bayleigh [Dayton]?
David: Very frustrating to leave — the people of color all left in the mid-segment of the game. And if it weren’t for the twists — me using my power — and Da’Vonne having the Veto, it seemed like it would’ve been five people back to back if you include Kaysar [Ridha] in that. It’s unfortunate. The way this game goes, you hope that luck or the way cards are dealt or the way choices are made in terms of nominating people — you know, it’s just frustrating. I don’t want to make any accusations on why decisions were made, but nonetheless, it was very frustrating leaving as the last person without getting further.