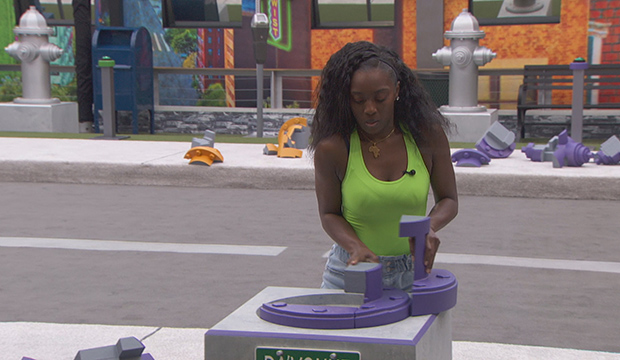 Tuesday was more of the same in the “Big Brother 22” house, except no one started a fire. Da’Vonne Rogers is still getting played to the high heavens by Nicole Franzel and Dani Briones over last week’s vote, so Thursday can’t come fast enough. She did find out that she’s getting the boot, so she tried to concoct a laughably bad plan to stay.

After learning from Christmas Abbott that it’s not looking good for her, Day told Kevin Campbell that she’s come to terms with it and advised him to keep campaigning as if he knows nothing. He again suggested that it could be Nicole, not David Alexander, who flipped the vote because Day is really only going by Nicole’s word against David’s here. Day repeated her favorite mantra: Nicole wouldn’t “f—” her again, and that Nicole hasn’t lied to her this season. Oh, girl.

Seeking a second confirmation, Day asked Dani if she told Nicole to flip at the last minute. Dani acted aghast and swore she did no such thing. Then Day floated her brilliant plan: She’ll tell David she believes him (she doesn’t) and that Nicole framed him, but if he votes for her to stay, she will go after Nicole for him.

Day: Did you tell Nicole to change her vote at the last minute?
Dani: No. Are you serious?

Day: I don't believe David. I'm thinking what if I convince David I do believe him, & if I stay I'm gonna come after her. You think he'll relay that to Tyler?
Dani: Mhm. I'm down.#bb22 pic.twitter.com/Wvu1gEJuiZ

This plan is clownery of the highest order. Even if David believes her and votes to keep her alongside Dani and Nicole — who are not voting to keep her but whom Day thinks would — she’s still not staying because she doesn’t have the votes from Tyler Crispen, Cody Calafiore, Enzo Palumbo and Christmas. And she knows “the boys” are against her. She thinks David is one of them but has also said he’s lowest on the totem pole, so why would he have that much sway over them? Dani said she’s down and she loves “sneaky plans,” which should have set off alarm bells for Day here. Dani immediately told Nicole, who was totally not down and told Dani to kill it.

Nicole is still stressing about telling Day the truth. Christmas told her she can’t say anything in the house because it would expose the Committee and suggested doing it in her goodbye message, which Nicole agreed would be the best course. So counting Christmas’ and Tyler’s as well, we’re going to have three goodbye messages in which people will reveal that Nicole flipped to frame David. Day will either be so embarrassed that she’ll never show her face on “Big Brother” again or she still won’t believe them and will need to “fact-check.”

But this is really the only thing to look forward this week since she’s being so unspeakably obstinate and blind about the whole situation and all the dynamics in the house. Day hasn’t approached David with her grand pitch yet, so we’ll see if Dani talks her out of it on Nicole’s behalf or will sit back and watch the train wreck unfurl.