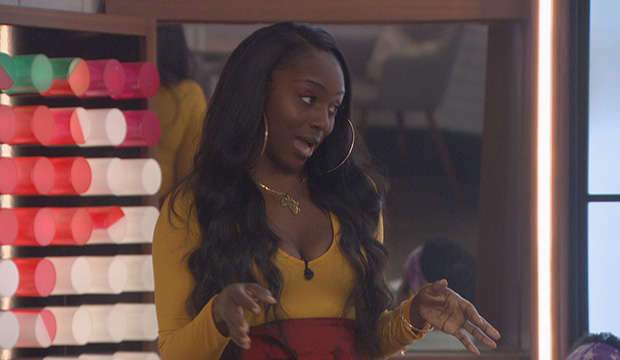 Da’Vonne Rogers knew her number was up on “Big Brother 22,” and she made sure to leave with a bang. The three-time player delivered another scorcher of a speech on Thursday, calling out the show’s history of predominantly white winners and noting that “21 seasons of winners and not one of those faces look like mine.” She may have (hopefully) changed hearts, but she didn’t change the houseguests’ minds, and she was evicted 5-2 over Kevin Campbell to become the second juror of the season.

Her fate was sealed when Tyler Crispen refused to use the Veto to allow Memphis Garrett to backdoor David Alexander. But Day’s biggest drama of the week stemmed from last week, when Nicole Franzel lied about her vote to evict Ian Terry. Choosing to believe Nicole, who had betrayed her in Season 18, Day spent most of the week certain that David flipped and was messing with her game yet again. Nicole came clean in her goodbye message, but it’s a little too late for Day.

We caught up with the fan favorite from the jury house to get her thoughts on Nicole’s lie, what she hopes Black viewers get from her third stint despite not becoming the show’s first Black winner, and winning that tiny Veto.

Gold Derby: You said you wanted to give Nicole the benefit of the doubt, but was there any part of you that thought she could be lying and framing David?
Da’Vonne: Absolutely. But at that point, it was weighing out the pros and cons. Pros for Nicole was this season I saw that she was trying extremely hard to repair the damage that was done back in Season 18, and so I didn’t want to look like a crazy person, like, “Oh my gosh, this girl is really trying her hardest and I’m just like, ‘Grrrrr,’” you know what I’m saying? So I really wanted to give her the benefit of the doubt that she was being true. I mean, the girl just gave me $5,000 and took a slop costume! So I’m like, “She’s trying on some level to do some type of repairing,” whereas David, on the other hand, had confessed to sabotaging my game throughout the season. So it was like, I had this person that’s trying to work on being good with me, and then I had this person that’s like, “I’m attacking you and I’m throwing you under the bus.” I definitely wanted to give her the benefit of the doubt over him, but in the back of my mind, I definitely was like, “What if she’s lying? What if she’s lying?”

Gold Derby: You said you wouldn’t have been mad, but had Nicole told you the truth when you asked, how would you have proceeded?
Da’Vonne: I wouldn’t have even been worried about Nicole. I would’ve been like, “OK, I’ll cross that bridge when I get to it. I need to get to David and rectify the situation.” That was my concern. It wasn’t even game-related; this was on a personal level. Personally, I didn’t want to be a black woman on television bashing a black man, and that’s what it was for me. It wasn’t even game-related. I wouldn’t have been upset with Nicole for doing something that was beneficial to her game — OK, cool, I get it. And I even tried to give her an out: I said, “Hey, did you panic at the last minute and thought we were going to flip, so you went ahead and flipped your vote?” I gave her an excuse. She could’ve been like, “Yeah, that’s exactly what I did.” And I would’ve taken that, and me and David could’ve worked that thing out, but she just continued to lie, and I think that’s why I’m frustrated. Because you could’ve told me and it wouldn’t have affected us in a game sense at all — at all — if she would’ve just been honest. My concern was not the game; my concern was the personal aspect.

Gold Derby: How did you leave things with David?
Da’Vonne: I made sure to apologize to David about the vote situation and let him know, like, “I believe in you and I hope you can pull this thing out.” We did get into one final argument because I asked for his vote — I knew I was going, but I was still trying to stay — and I asked for his vote to be my fourth to cap it off. I said, “Hey David, I have three votes. Can you be number four?” And he goes, “Well, no, because you’ve shown me that you trust Nicole over me.” And I’m just like, “Because you’ve been lying to me and throwing my name under the bus!” But at that point, I was like, “OK, David, I’m done.” It is what it is. I give up. Like I said, they put Denzel Washington and Viola Davis in the house together — we were both in there acting and it was just too much. At that point, the damage had been done, and I’m just like, “OK, good luck. I’ll be rooting for you from the outside.”

Gold Derby: Now that you know about the six-person alliance, how do you look back on some of the relationships and alliances you had, like the Slick Six?
Da’Vonne: I always felt like the Slick Six was a joke. I would tell Bayleigh [Dayton] all the time because she was so excited about it and I’d be like, “Bayleigh, I think they’re making fun of us. I feel like they’re mocking us behind our backs. I don’t feel like this is legit.” I felt like the Connect with me, Bayleigh, Enzo [Palumbo] and Cody [Calafiore] was legit. That’s what I felt was official. But the Slick Six, I never took it serious — I was like, “This is a joke! They’re definitely laughing at us.” So now knowing that there is this big alliance, which I wanna say I figured out minus Memphis — I didn’t know Memphis was in the situation [and] that was the only thing that caught me off guard — but it’s like, dang. I told Dani [Briones] so much stuff. And it’s like the situation where Tyler was telling me and Bayleigh that Dani was coming for us, and Dani had been telling me that Tyler was coming [for us] — it was like, what was the point? What was y’all trying to accomplish here? This season is gonna get messy. It’s about to get messy!

Gold Derby: Even though you didn’t win, what do you hope you’ve accomplished this season playing for a bigger purpose amid social unrest?
Da’Vonne: So many African-American hopefuls have reached out to me and said, “Hey Da’Vonne, I wanna audition, I wanna play this game, but I feel like the odds are against me. We don’t win. None of the winners look like me. What’s the point? Should I even do it? There’s no purpose. This game is not catered to us.” And so I hope that I’ve shown them that it’s not impossible even though I didn’t accomplish it — David is still in there fighting, so we ain’t out of the race yet, we’re still in this thing, and Kevin is there too — so it’s not over. We still have an opportunity to get this thing going, but I hope that I was able to show them that conversations are going, we’re talking about it, we’re making people more aware. Maybe we won’t be so big a target and maybe it’s possible to come in and go further. Already, me and David and Kevin have made progress because we broke the first juror curse. There was this curse that was on us for the longest where we were either pre-jury or we were the first member of the jury. Look at me: Number two! So progress has been made, so I just hope that level of discouragement is gone and I hope they do audition and they do come in, and hopefully one day there will be a winner that looks like me.

Gold Derby: Are you upset you didn’t get a regular-sized Veto last week or are you happy with your mini Veto?
Da’Vonne: I was originally upset, like almost — no, definitely to the point of tears that I didn’t get a regular Veto because I was like, “Three seasons! This is my first comp win and it’s a little Veto! This is a joke! My first win is a joke!” But from the way the season went down, my little Veto had a big punch in it, so I love it. I’m happy about it!