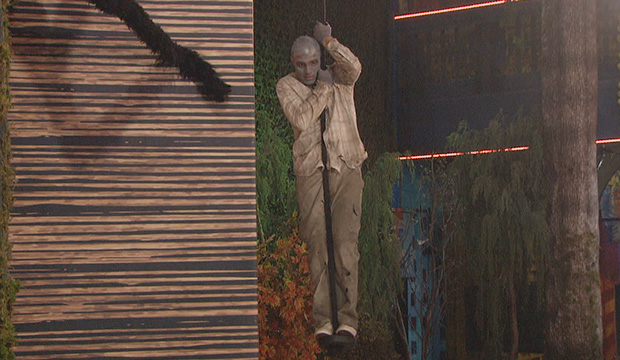 Well, we made it. Somehow. The “Big Brother 22” finale is here after the most painfully dull season imaginable. Tuesday, the last full day in the house, was much ado about nothing except packing and Enzo Palumbo continuing to hold out hope that Cody Calafiore will take him to the end.

Poor guy. He still believes. Well, guess he has to. In his final late-night cam-talk, Enzo tried to justify his choice to keep Nicole Franzel in the triple eviction, arguing that he needed her to stay to win comps and be a target. He didn’t think David Alexander would win anything and would be an easy pawn everyone would want to take to the end. False! Memphis Garrett would’ve kept coming for him, bro. Enzo wanted Christmas Abbott to win the final five HOH to take out Nicole, but it was “bad luck” that her pumpkin popped out. Well, Christmas would’ve gone after Cody if she had won, but yes, a late-game Christmas HOH was the shakeup we needed.

Enzo feels he played a great game since he’s not a comp beast and managed to never hit the block. True, his social game was on point, but he also hitched his wagon to Cody, who was in control of everything and had it easy the whole time. Enzo was never running the game. He thinks Nicole is too scared to take him to the final two, but he doesn’t think Cody would fear him since Cody is a comp beast and has played a great game. And then he invoked Dr. Will Kirby and Derrick Levasseur because sometimes the greats need to be taken to the final two. To be fair, Enzo didn’t seem to imply he was a GOAT, but could you imagine? His gut says Cody will take him and he just wants that chance to make a speech even if he loses. Maybe don’t listen to that gut.

SEE ‘Big Brother 22’ spoilers: Enzo doesn’t think Nicole has a chance against Cody, but who really does?

Enzo kept up with the self-motivational speech for a few minutes before sighing, “I’m getting third again.” You know, at least he’s not that delusional. Unless Cody or Nicole have something else up their sleeves — and it doesn’t seem like they do — we know what’s going to happen. The odds were already against Enzo the second Christmas left, and he needed to win his way into the final chairs.

While Enzo was stressing over his fate, Nicole continued to practice her speech. She plans on reminding people that she played a good social game by downplaying her win and not seem like a threat. If Janelle Pierzina were in the jury, you know she’d once again bring up how Nicole’s game is to lie around in bed for nine weeks and then wake up and start winning. And Cody? He was just maxin’, relaxin’ and acting all cool. Imagine if after all this he comes in second again.