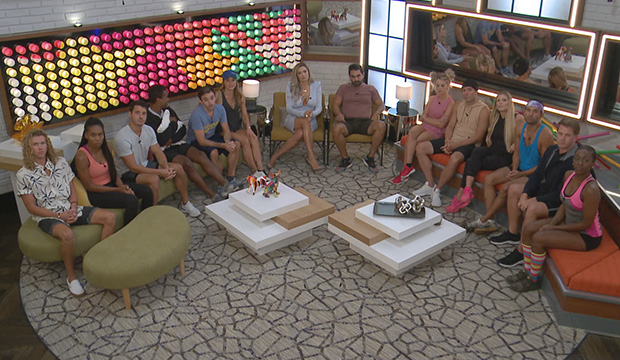 Another week, another round of the same people in power on “Big Brother 22: All-Stars.” Yawn. Enzo Palumbo won HOH on Thursday, shattering Jaysar (and really, all “BB”) fans’ dreams of Kaysar Ridha avenging Janelle Pierzina‘s eviction by winning HOH just like she had done for him twice all those years ago and shaking up this season. Frankly, Enzo really didn’t need to win this HOH — he was in a good spot with everyone — but now he’s going to try to instill more paranoia.

He and Dani Briones cast the two rogue votes for Janelle to stay on Thursday, nearly sending the Chenbot’s system into haywire. Guess she was not caught up on the scheming. On Wednesday, Dani had pitched to Cody Calafiore that the two of them vote for Janelle to stay and then pin it on Da’Vonne Rogers and Bayleigh Dayton; Cody refused. It’s unclear if Dani pitched it to Enzo, especially during the hours-long lead-up to the live show when the feeds are down, but Enzo threw in his own hinky vote last week to save Nicole Anthony, so it’s entirely possible that they both tossed in hinky votes without knowing the other would. Dani and Enzo did not have a one-on-one chat Thursday night.

But now they’re playing the blame game with them. Both are playing dumb and constantly asking everyone who they think cast those two votes. You know what they say about the lady protesting too much. Hopefully someone picks up on that. Cody confided in Enzo that Dani had pitched him the ploy, but he didn’t want to do it. And just when you think he’s about to figure out that she did it, he said he’s not “super convinced” that it was Dani when Enzo suggested Day. “I just think it was weird she asked me and it ended up happening,” Cody said. Is it though, dude? Think about it some more.

“Someone is trying to pin it on two other people. F—ing bullsh–, yo,” “Enzo said, adding that he’s gonna talk to everyone to see what names people will say. “It makes my HOH easier.”

At the moment, his plan is to nominate Kaysar and a pawn; if Kaysar wins Veto, he might backdoor Ian Terry. Enzo thinks Kaysar “has got to go” because he had talked about Cody and Tyler Crispen. “You know he is talking about me because we have never game talked,” he said. Actually, Kaysar hasn’t at all because you’re not in the Committee and he doesn’t think you are. This is why you didn’t need this HOH. And Kaysar is flying solo right now. You can use him to take out the girls you’re working with who you think it’s “too early” to target. And even if Kaysar is going after you, why are you so worried? Your side is running the house and there has been no shift in power. Imagine being scared of an army of one who can’t win comps.

Later, Christmas Abbott tried to subtly turn the target away from Kaysar, telling Enzo that Kaysar confides in her. Enzo agrees that Kaysar is a “good guy,” but “if the whole house is telling me put him up, what am I supposed to do?” Uh, not put him up? Work in your own self-interest? Christmas mentioned others who could be dangerous, like Ian, who would “do anything” for Nicole Franzel, who is really close with” Cody, who is also “close with Dani.” “You think [Dani] would throw the vote to Janelle so she can pin it on somebody?” Enzo asked. “She is really good socially. You have to keep an eye on somebody like that.” Christmas warned that he has to remember Dani’s been playing the game for a long time.

And how could we forget the option of David Alexander, by whom everyone is annoyed after Davidgate. Memphis Garrett has obviously wanted David out for a while and gave advice to Kaysar to lay low and let the target shift to David. “Everyone is fed up with him. If he ends up on the block with you or me, we can convince this house to vote him out,” Memphis said, adding that no one would want to be in jury with David.

“Hell no. Not just that. You don’t want that dude in jury,” Kaysar said. He later brought up to Dani how David is just a clueless, indecipherable mess. If he were talking to anyone else, this would’ve been fine, but it’s Dani, so you know she’ll find a way to use it against him. (Kaysar, for the record, doesn’t care about the hinky votes and doesn’t understand why everyone’s coming up to tell him they voted for him to stay. The unbothered old school way.)

Dani is gaming very hard, and the guys in her multiple alliances have noticed that long ago, but they’re all too afraid to make a move. She told Cody that she didn’t cast the rogue vote, but had they gone through with the plan, there would’ve been four votes for Janelle. No, actually, there would’ve been three if it were going to be the two of you and the “mysterious” third person. Unclear if Cody picked up on that frame job via bad math, but he said his first thought was that she had convinced someone else to do it, which she denied. This is not a good move by Dani. She could’ve gotten away with this had she not pitched the idea to Cody first, but he’s already suspecting this might be more than a coincidence. She’s better off admitting she did it and then helping him figure out who the other person was.

One person is definitely onto her though. Day told Kevin Campbell that Dani might be one of the two because she had been called multiple times to the DR since the live show. OK, well, tell that to someone else besides Kevin!