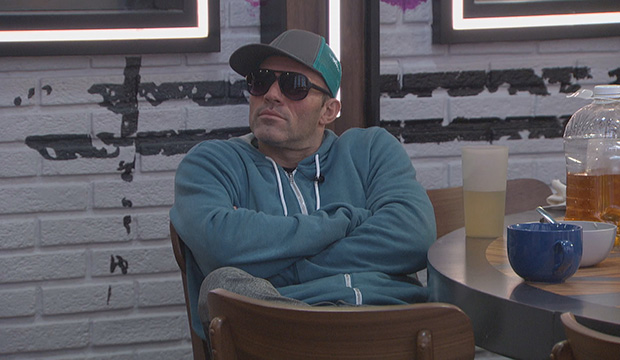 Ezno Palumbo just didn’t want to finish in third place again on “Big Brother,” yo. But the Season 12 alum couldn’t control his own fate in the final three after losing the first two parts of the final HOH, and he knew his only shot at making the final two is if his ride or die Cody Calafiore took him over former champ Nicole Franzel.

Despite some roller-coaster rants, Enzo always felt in his gut that Cody would honor their final two deal, and that he did. And as Enzo also knew, Cody “destroyed” him in the vote, winning 9-0. But Enzo, who took home $50,000 for second place, believes he deserved a vote or two for his killer social game. See what else he has to say about his runner-up finish and why he would’ve been petty this time if he were on the jury.

Gold Derby: You might be the happiest runner-up I’ve ever seen. What were your expectations when Julie [Chen Moonves] was pulling the keys?
Enzo: Yeah, I was happy that I was there. I didn’t want third place again, so I was happy I was there. But when I kept seeing Cody’s name, I was like, “I know he was good, but someone throw me a vote here!” One, two votes! That definitely got me upset, but like I said, I’m proud of what I did in this game and can’t no one take that away from me.

Gold Derby: Were you thinking there could be a bitter jury because we’ve seen a couple of those the past few seasons?
Enzo: Yeah, I felt I should’ve — now looking back and thinking back — in the goodbye [messages] been more a little bit more direct as far as how I was playing the game, the moves I was making. They were just so confused, like, “Yo, what type of game is Enzo playing? What is he doing?” Look, I played me, man, and I got to the end of this game. I played everybody in that house … but Cody was well-rounded, winning everything, winning comps when he needed to down the stretch. I think that’s what put him to the top, but 9-0 is still too much because I did play an awesome game too.

Gold Derby: Cody told Nicole during the commercial break that he was evicting her. What did you know during that time?
Enzo: Yeah, she comes downstairs and she’s crying. She’s like, “He already told me he’s cutting me.” So I’m like, “Great for me then.” But I want to see him do it. “Let me just wait this this thing out and hopefully she’s right about what she knows and he cuts her and I’m in the final two.” And he did and I was ecstatic.

Gold Derby: Did you think she could be lying or playing you?
Enzo: It’s just going quick there. I felt like he was gonna take me over her no matter what, but again, you never know until he says it. I was just sitting there waiting, like, “If he doesn’t take me, I think I’m gonna swing on him.” I was like, “You better take me!”

Gold Derby: During the last couple of days, you kept saying your gut was telling you Cody would take you, but like five minutes later, you’d say, “I’m getting third again.” How confident were you in your gut?
Enzo: Yeah, I think in his head was the whole taking Derrick [Levasseur] thing [in Season 16] and “was this going to come back to bite me?” So I think that was there. I felt like the only shot I had was Cody because I knew for sure she wasn’t take me, so for sure my only shot was Cody, so I was rooting for him to win that last HOH and was like, “This is it. We’re gonna see if my gut was right.”

Gold Derby: How much of your final speech did you prepare? It was hilarious and people were laughing with you.
Enzo: You know what it was? It threw me off. The inexperience — I had never been in those two seats at the end of the game. They would be on the screen and they would come off the screen, and then I would hear them talking and laughing, and then Julie Chen’s face would pop up and she was looking at me like, “This kid is crazy.” So it threw me for a loop because I had a lot more things I wanted to say, just as far as my strategy went and this and that, but I was getting thrown off by that a little bit. It is what it is. No matter what I said, they were gonna vote for Cody.

Gold Derby: You got very emotional after you lost Part 2 of the HOH. Do you think that your meltdown maybe helped you in convincing Cody to take you, like maybe he felt bad for you a little bit?
Enzo: I think it did work a little bit. It was genuine. I was upset, but I think he was like, “Man, this guy is like…” Because I knew she was taking him, and if there was some funny business where he was gonna throw that last HOH in Part 3, that’s what I was scared of. He knows she’s taking him, so if he throws that last HOH, I’m done. Hopefully that helped me a little bit. He did come to me after that comp in the photo room, like, “Bro, you know I’m invested in you and I’m invested in us, so take so time for yourself if you need to come out and be the Enzo that we know.” I was like, “All right, bro. You’re gonna destroy me no matter what if you take me to the end” — always putting that in his head. And he really did. I was right. He really did destroy me, which I don’t think I deserved that, but it is what it is.

Gold Derby: You’ve also said that if you go out third, you would vote for whoever didn’t evict you to win, so if he did cut you, you would’ve voted for Nicole.
Enzo: I would’ve been petty this time. Last time, my father said to me, “Why did you give Hayden [Moss] your vote? He just voted you out.” My father didn’t like that, so I was like, “This time I’m gonna be petty, so whoever cuts me is not getting my vote.” Although Cody did deserve the vote over Nicole if he did do that, but I was gonna be petty this year.

Gold Derby: If you were the final HOH, would you have taken him or Nicole?
Enzo: Man, and I’m telling you I love Cody — I’ve got a friend for life — but that moment, I have to show something to the jury that I made a big move in this house. I played this game to a T. Everything I do is calculated, whether people think it’s a big move or not. But I had to show something of significance to the jury and that would’ve been it — bringing Cody’s head to the jury, that would’ve been big. I probably would’ve done it. I hate to say it because I love the dude, but I probably would’ve done it.

Gold Derby: A lot of the jurors have talked about how whoever cuts Cody, they would vote for them to win.
Enzo: It was an all-stars season and they wanted to see that blood. At the end, he just steamrolled. He knew he had to win everything to win out. He wasn’t taking any risk on me because he probably had that doubt on me. “Enzo will probably cut me.” He knew he had to steamroll and he did it.

Gold Derby: One of your big moments could’ve been a turning point for the good or bad. It worked out for you in the end, but you did not evict Nicole during the triple. A lot of people were upset because you should’ve gotten her out, she was a winner, and if Cody had cut you in third, everyone would’ve been like, “See, you should’ve cut Nicole.” But he took you instead, so how do you look back on that?
Enzo: I feel like a lot of people loved me until that point. Trust me on this, trust me, I wanted to get rid of her. She was a champion. Oh, my God! When I walked into that room, when I had to say that — because Dave [Alexander] was my guy and I think Dave today is still salty about that, and I love that dude and I had a lot of fun with that guy in the house — but for me, at that moment, I couldn’t do it. Dave was the pawn now. They wanted a big target out of the house and she was sitting next to Dave, and Dave was gonna take all the targets out just by sitting on the block. By keeping her in the house, she was a bigger target than me. That’s why I did it. I made Cody happy by doing that. Cody’s my guy. That’s it.

I needed to keep Cody and Nicole as the target. I kept saying those two came in the house pre-alliance, those two are tight, gotta break them up. So I had to keep her in the house to protect me. I did it for me. By using her as a target and a shield and pairing her and Cody together made me hide behind that. Trust me, I wanted to get rid of her. She was a champion and it would’ve been easy. “I voted to evict Nicole.” And she’s gone. I know that. I controlled that. It worked wonders for me. She did exactly what I wanted her to do. She won HOH, right after Cody’s HOH, which protected me. She wins the POV, which protects me. It’s not my fault that Christmas [Abbott]’s pumpkin drops out of her basket and Memphis [Garrett]’s pumpkin drops out of his basket because they were both going after Cody and Nicole. I was just in a great spot no matter if I voted her out or not.

Gold Derby: Have you heard from your foot stalker since you’ve been home?
Enzo: For some reason, I can’t get on Twitter. I don’t know what it is. I’ve deactivated it. I’ve gotta find out why. But she stalked me on Twitter. I might have a bunch of foot stalkers now. I gotta go back on Twitter and see. I gotta maybe Google something and see how to get back on. It might be a good thing I’m not on Twitter now. Everyone’s all chippy now and getting upset about who said this or that about me. It’s over! It’s over! That’s it. it’s not gonna make no money now. I don’t engage in that, so have at it. Do what you gotta do.