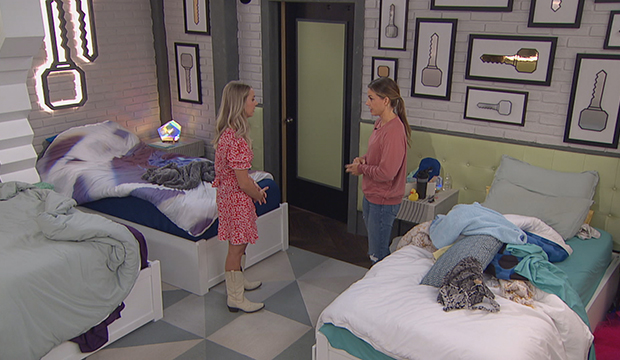 If you’ve perused your TV listings, you’ll notice that “Big Brother 22” will air on Friday, Oct. 23 at 8/7c in addition to its usual Monday, Wednesday and Thursday installments this week. What in the world is that episode?

The short answer is that no one knows yet because CBS hasn’t announced it and neither did Julie Chen Moonves last Thursday when she was pimping this week’s episodes. But we can speculate, and our best guess is that it’ll be a special hour showcasing the luxury comp that was played last Friday. The final four — Enzo Palumbo, Cody Calafiore, Nicole Franzel and Christmas Abbott — participated in a luxury comp for some extra pocket money for themselves and a member of the jury.

It’s unclear exactly how the comp worked, but based on their conversations, the final four each got to select a juror and then played to win $10,000 for both of them. We won’t spoil the winners here, but let’s just say that Christmas regrets her partner choice.

SEE Save me: Here’s the ‘Big Brother 22: All-Stars’ TV schedule

“Big Brother” has done these special luxury comp episodes before, especially since it excised the weekly luxury and food comps from the show ages ago, but they don’t typically involve selecting a juror to benefit as well. This twist is, however, a good way for the houseguests to curry favor and secure a vote if they’ve burned a juror in any way.

After this week, there are two more episodes left: one next Monday, which will be the usual clip show/Part 1 of the final HOH, and the two-hour finale next Wednesday starting at 9/8c.