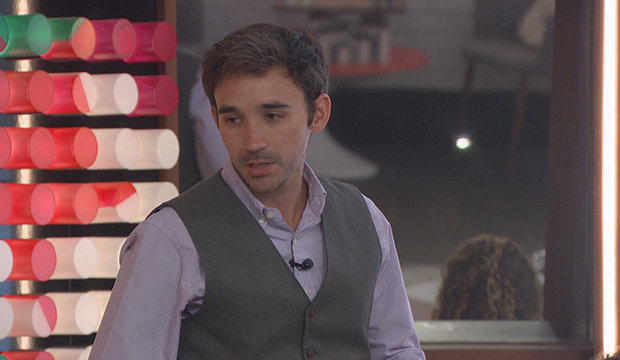 Dani’s comment that Ian was the “ultimate pawn” gave the impression that she wanted to send Tyler Crispen out, and she did, briefly, but the other members of the Committee were not onboard. Meanwhile, Nicole Franzel was a stressed-out mess because she didn’t want to vote out her final two ally and fellow winner. Ian spent the week thinking that his forthcoming eviction was a “blunder” because Dani chose the wrong renom until he heard Tyler’s goodbye message, in which he outed the Committee down to every single member (look at that jury management!), and let out a huge sigh of relief — and probably had a giant grin behind his mask.

So how does Ian regard Dani’s HOH reign now? We caught up with him from the jury house.

Gold Derby: Now that you know about the Committee, how do you look back on everything that happened this week?
Ian: Now that I know about the Committee, I look back at everything and think that all that actually happened was my time for eviction — my number for eviction — just kind of got pushed up because of the Disruptor twist and Da’Vonne won the Veto, so Dani needed another nominee. I was probably still a few people down the line for the Committee, so I’ll never really know what would’ve happened had I stuck around ‘til later. Things could’ve shifted. But knowing what I now know, it just makes a lot of sense.

Gold Derby: As you started to sense that you might not have the votes, did you ever suspect that there might be a large alliance working together?
Ian: I actually did say at one point to Dani something like, “I really hope there like is an alliance between you, Nicole, Cody [Calafiore] and Tyler” — something like that because, frankly, I just didn’t like the way things were doing down. Did I have a strong suspicion? No. Did it cross my mind at least two times? Yes.

Gold Derby: Kaysar [Ridha] had warned you about some of the alliances and groupings, and that you might be low on the totem pole. Do you regret not listening to him?
Ian: The reality of it is I wanted to work with Kaysar in earnest. I don’t know how that came across on the show, but I did honestly want to work with Kaysar. The problem was Kaysar never had power. Enzo [Palumbo] won HOH and put Kaysar up, and he was gone. And then the next week, after I tried to shake things up a little bit using Kaysar’s eviction speech, Christmas [Abbott] won HOH, so I had to again pivot back to playing with that group. I wanted to work with Kaysar, especially after Janelle [Pierzina] had left. I really wanted to work with Kaysar; he was my favorite person in the house alongside Nicole.