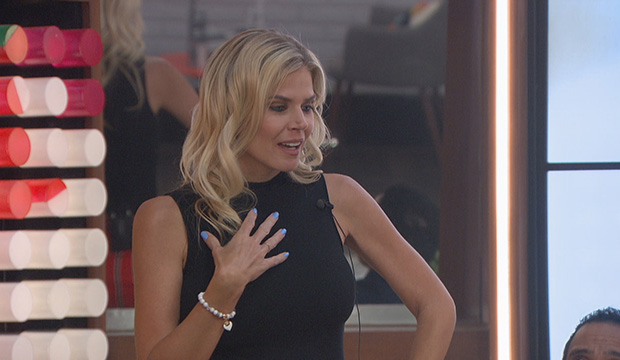 Twelve years ago, Keesha Smith made it to the final four of “Big Brother 10,” but she unfortunately came nowhere near that on “Big Brother 22: All-Stars,” becoming the first evictee on Thursday. Adding insult to injury, it was a unanimous 13-0 vote to boot her over Kevin Campbell.

“It sucks. There’s no better way to put it,” Keesha told Gold Derby. “It’s a bummer.”

Despite being on the block, the former America’s Favorite Player winner kept a low profile until she started campaigning on Wednesday, but it was too little too late. Check out our exit interview below to find out what she would’ve done differently, who she’s rooting for, and what Cody Calafiore smells like.

Gold Derby: You had a feeling you were leaving before Da’Vonne [Rogers] confirmed to you yesterday. Why did you have that inkling?
Keesha: You could tell by the way people started acting in the house. They avoid you. … It’s like all of the sudden you contacted the plague, so that’s the best way to put it. There were only a few people that would hold conversations with me. Everyone else was just being really awkward, so I knew, I pretty much knew. I was like, ‘Oh know, it’s me.’

Gold Derby: I loved your speech, but why did you decide not call out people like Enzo [Palumbo] and Memphis [Garrett] by name and keep it vague instead?
Keesha: I’m confused on the whole Memphis thing right now. I haven’t heard anything, I haven’t seen anything, so from being in the house, I did think Memphis was going to give me his vote. I’m not really sure what happened. But the whole house voted together, and I understand that. It’s the first week. Nobody wants to be the one to stand out, nobody wants a target on them. Everyone in this house is so chill. They literally were telling me how much they loved me as I’m walking out the door. I don’t think it was ever a personal vendetta against me. I think they just needed to make a choice between the two of us, and that’s pretty much how I took it.

Gold Derby: It seemed like you waited until Wednesday to really start to campaign. Do you think things would be different if you started earlier or campaigned more aggressively?
Keesha: Looking back on it, yes, I should have. But Janelle [Pierzina] kept telling me — there would be people I would name and be like, “Who do you think I have? Should I go after this person or this person?” “Oh, no, no, you can’t trust them. Don’t do that.” It’s like, “Ugh!” You’re walking such a fine line in there. I was like, “OK, I don’t want to come off aggressive.” Because then people would be like, “Oh, Keesha, she’s a game player. We need her out of here.” I felt like Kevin was laying really low also. So it’s really difficult when you’re in there and you’re trying to decide what to do. I was working on certain people to really try to get in good with them to where they’re like, “Oh, I don’t want Keesha to leave.” But obviously that didn’t work so well.

Gold Derby: You also mentioned how you felt like Kevin was making a lot of promises and deals with people, and you wanted to do the opposite and didn’t want to make deals. Why was that?
Keesha: I wanted to go the opposite way. I was hoping people would realize that if you make deals the first week, you’re full of it. I was hoping people would respect that, like, “OK, Keesha’s not promising us the world.” At one point, Nicole Franzel said to me, “Oh, Kevin promised me that I would be good to go,” and I was like, “Do you really believe that?” Like how can he promise you that the first week? I felt like he was going around promising this to everybody. How can you do that?

Gold Derby: Going into the season, what was your game plan?
Keesha: Going into the game, first of all, I didn’t know a lot of the houseguests, so I needed to fill out what a lot of their personalities [are like] first and foremost. Once I got in there, I just kind of fell in line with Janelle and Kaysar [Ridha], so that made me feel really good, like, “OK, I got two of the best players in here on my side.” I felt great about that in the beginning — I mean, I felt great about that the time whole time — but the problem is the newer players have such a bond and they were in control of the house the first week. That makes it really difficult.

Gold Derby: Did you sense that it could become new school vs. old school?
Keesha: Absolutely, absolutely. Janelle, right away, Kaysar, right away, was like, “It’s gonna be them against us. We’ve got Memphis and you.” … As much as I love Kaysar, I probably shouldn’t have listened to him on that level, but I definitely was listening to what he was telling me and I was thinking, “Oh, no, there’s so many of them compared to us.”

Gold Derby: Did you expected to have a stronger bond or a working relationship with Memphis coming from that same season like Janelle and Kaysar?
Keeesha: I expected at the beginning to have a bond with Memphis for sure. If I had stayed and it went longer, I’m not so sure that’s the way it would’ve went. But in the beginning, I absolutely thought we would have each other’s backs.

Gold Derby: How much do you think the game’s changed since you played 12 years ago, which is crazy to think about?
Keesha: [Laughs] It’s crazy, trust me! It moves really fast. Very fast. And I think that was one of my downfalls. It was moving so fast, and it’s like I needed time to adjust and I didn’t jump in quick enough.

Gold Derby: What would you do differently now knowing it moves so fast? Talk to more people earlier?
Keesha: Yeah, I mean, I was definitely being social, but I would’ve went up and really tried to make friends with Cody. I would’ve introduced myself to him. I would’ve had a genuine conversation with him. I think I really messed up by just being up there and not really saying much to him the first night. I think that was a huge mistake.

Gold Derby: What does Cody smell like? You were very taken by his cologne.
Keesha: [Laughs] Oh my gosh, this is so embarrassing! He just smells so good! I don’t know what he uses. Every time he hugs me, I’m like, “Oh my gosh! What are you using? You smell amazing right now.”

Gold Derby: You should’ve swiped it on your way out.
Keesha: Yeah, I should’ve asked. “What do you wear?”

Gold Derby: Janelle really went to bat for you. Do you think she perhaps put a bigger target on her back by campaigning for you?
Keesha: I hope not. I really do hope not. I think it’s going to be hard for Janelle because this is her fourth time on, and I think people are going to use that as an excuse to go after her. People are intimidated by her. She’s had four times on the show and I definitely think that makes her a huge target more than anything else.

Gold Derby: Who are you rooting for to win?
Keesha: My top three, I would have to say, is Janelle, Kaysar or Da’Vonne.

Gold Derby: What do you think Janelle and Kaysar, in particular, have to ensure they go far since they are such big targets?
Keesha: They’re going to have to bring more people in on their side. I was telling them before I left the house, “Listen, Christmas [Abbott] really likes you. Trust me, she really likes you.” I’m watching her with Kaysar and I don’t think she would ever go after him. I think she looks up to Janelle, so I told both of them, “You really need to work with her.”

Gold Derby: Are you hoping there is a battle back so you come back into the house?
Keesha: That would absolutely amazing! ‘Cause then I’d actually get to play!

Gold Derby: If there isn’t one, would you play for a third time?
Keesha: Absolutely. After 12 years out and going into the house so fast, I had no time — no time at all — to just adjust. And you could tell after the first couple of days, I was adjusting, but by then I’m already up on the block. So as I’m getting into my comfort zone, like, “OK, let’s do this,” I had this war zone ahead of me. And by then it was just too late. So if I actually got to go into the house again, I would do it completely different.

Gold Derby: Hopefully it won’t be another 12 years.
Keesha: Uh, no. [Laughs]

Gold Derby: How excited are you to see your dogs?
Keesha: I’m so excited! You can’t tell them that you’re leaving and they don’t know where you went, so lots of cuddles!