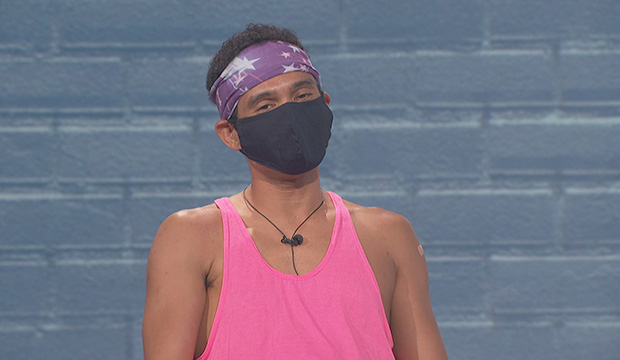 Kevin Campbell was the block star of “Big Brother 22,” getting nominated five times. But after four weeks of being the pawn, he was Cody Calafiore‘s target this time. The Season 11 alum made amends with Cody after making him “big mad” and attempted to leverage David Alexander‘s decision to take the $10,000 during OTEV into a vote-flip, but alas, he was evicted 6-0 in the first of Thursday’s triple eviction.

Kevin, however, does not regret that argument with Cody, but he is bummed about how the season has been shaking out with the Committee ruling week in and week out with no power shift. Get his thoughts on his exit and the game below.

Gold Derby: Do you think you would’ve been any less of a target if you hadn’t made Cody “big mad” during that argument?
Kevin: I firmly believe that I would not have made myself less of a target if I did not make Cody “big mad” during the conversation I had with him pre-nominations. Even if I made him medium mad, small mad, he still would’ve made me the target, and based upon some of the conversations happening in the jury house already, I feel like it was set in stone. I already had a feeling Cody had it out for me maybe a week before, and that conversation just solidified it. Oftentimes what you don’t really see on the shows or even on the live feeds is how a lot of the stuff is emotion prior to major events, like being nominated. That conversation just really brought it to the forefront that hey, this was what he was really thinking, and we just had a moment of honesty. I think it was a moment of actual honestly. No one was actually saying what they felt, and that was a moment of “This is what I really feel and that’s what you really feel. Thank you for sharing a real moment with me.”

Gold Derby: Earlier this week on the feeds, you said you shouldn’t have returned because you were having a terrible experience this time. Were you just venting or do you still feel that way?
Kevin: Gosh, I did so much venting on the feeds. I have two thoughts, and it’s possible to have two thoughts, so I just want you to walk with me on this. I think you can feel extremely grateful because you can have an amazing time, you can feel like this is the best experience I’ve ever had, but you can also feel like, “Why did I do this?” You can also feel like, “This is crappy.” You can also feel a little bit of regret. You don’t always have to feel one way or the other; you can kind of feel both at the same time, if that makes sense.

Sometimes you saw me expressing one way of feeling and the other, and the truth is it’s a combination of both. I’m extremely and I was extremely grateful to be a part of this experience, but also too, I was realizing in the house that how amazing a time I had on my original season and how great I did. I was wondering, like, “Why did I try to surpass that?” It was already kind of perfect the first time. This time, it turned out to be a lot more difficult, but because of that I’ve been able to experience the full spectrum of the “Big Brother” experience, from being on the in in a major alliance on my original season to this time being on the out, fighting for your life every time. And that broad spectrum of experience, at the end of the day, I think is really gonna give me a really great perspective of this game that I will walk away from being eternally grateful for.

Gold Derby: You’ve long suspected a large alliance and Dani [Briones] confirmed she was in one. What do you think of their gameplay so far?
Kevin: I’ve suspected that there was a large alliance for a long time, and the truth is I actually think they’re doing a great job because they’re dominating. I just think it’s boring, personally, because when I watch “Big Brother,” I’m not a huge fan of majority votes, I’m not a huge fan of consensus, I’m not a huge fan of people just dominating the game. And so I, personally as a fan in the game, if that makes sense, was like, “This kind of blows.” But stepping out of it now, I’m like, “Oh, OK, that’s great for them that they were able to keep it together and dominate.” I just wish there was an opportunity to blow it up for a moment and challenge them.

When Da’Vonne [Rogers] used her Veto and for a very brief moment kind of challenged it, and it was the closest I got to feeling like, “OK, there’s some disruption to this.” When David used his Disruptor power too, it was the closest we got to that. But other than that, it just felt like, “Wow, everything is consensus in this house.” Everyone is like unanimous on everything. I felt like it was very awkward in the house and actually boring, like jeez, this is not exciting. I can’t even imagine watching the show.

Gold Derby: Who would you have targeted had you stayed?
Kevin: If I stayed, I would’ve targeted Cody or Tyler or Nicole, one of those three. Because I feel like Cody and Nicole know each other, and their relationship was a little too strong and little unfair in my perspective – like their parents know each other, they’re going to each other’s wedding. It felt like a couple came into this season and I was playing solo, and I just didn’t like that level of fairness. And then Tyler because that guy’s a beast, so I just want to weaken him just a little bit. Mostly for respect I wanted to target him.