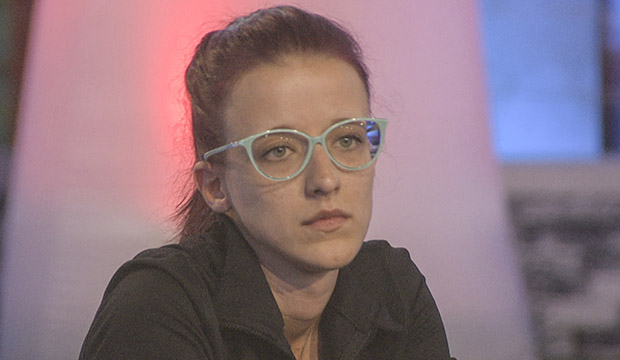 Well, the unthinkable has happened. Nicole Anthony actually talked to the demon spawn (in her mind) that is Janelle Pierzina and her equally evil (in her mind) cohort Kaysar Ridha on “Big Brother 22: All-Stars” on Wednesday, and she maybe, just maybe, has realized she was wrong and effed this up badly.

After yet another day of bitching about Jaysar and threatening a house meeting, Nicole A. finally talked to Janelle, telling her that she felt like Jaysar used her and set her up. Janelle was basically like, “WTF? Why would you think that? I’ve been trying to save you.” And Nicole A. told her that “everyone” thinks this was all “Janelle’s plan.” And you believed them.

“I don’t play like that,” Janelle said. “Why would I be trying to save you if it was my master plan to get you on the block?”

We don’t know either, Janelle.

Nicole A. then talked to Kaysar, who went into full Dad Mode. Seriously, this was like a scene straight out of “This Is Us.” He told her that they’ve been fighting like hell to keep her, that she’s the “sweetest” person in the house (wait ’til he sees her comments from this week), and that Janelle freakin’ cried because she was so distraught about her being on the block. Nicole A. admitted she badmouthed Jaysar to the whole house and now feels “horrible” if she goes home and finds out she wasn’t being used (well, you were being used — by the rest of the house to gang up on Jaysar, not by Jaysar).

“It doesn’t change anything when it comes to us. I don’t care what you said. I want you to be part of an alliance with us, and not in a way where we are going to use you or you are not included,” Kaysar told her. “This game is hard, and it messes with your head. Don’t underestimate the amount of pressure that you have incurred being on last year.”

King Kaysar is nicer than all of us. He told Nicole A. to get into a better headspace and that he’ll work on securing her votes. And that’s exactly what he and Janelle did the rest of the night. These two went full Mom and Dad on Nicole A. She’s like the bratty child they forgive and still love after an irrational temper tantrum. Honestly, Nicole A. is lucky she’s not playing against the savage Janelle of “BB6.” Kevin Campbell nearly undid Kaysar’s convo with Nicole A. (stop gaslighting her, dude), who is still sort of wary of them, but at least she’s open to the possibility that she might have been completely off-base about them.

Someone should’ve told Jaysar that campaigning for a vote-flip was a Sisyphean task. Janelle believes they can force a tie and get Memphis Garrett to break it to save Nicole A. Da’Vonne Rogers and Bayleigh Dayton are unsure about doing this since they want to be good with the other side of the house. This would be less of an issue for them if they didn’t spill practically everything to the other side that is not actually interested in protecting them when it gets down to it. Day is also in a personal predicament because she knows David Alexander does nothing for her game, but she doesn’t want to evict a Black man this early. Janelle had a productive chat with Ian Terry, who said he went from 66/33 to 55/45 for keeping David. He also promised Janelle that she and Kaysar are safe if he wins HOH, and she told him she will help him take down the other side but keep Nicole Franzel safe for him.

Potential Team Nicole A. — Janelle, Kaysar, Day, Bay, Kevin and Christmas Abbott — met with her, and she later asked Jaysar to leave so she could chat with the others. Day, Bay and Christmas don’t promise their votes, so Nicole A. is convinced she’s going home.

Who would’ve thought Christmas would be in the best position in the house? Jaysar have no idea she’s in that majority alliance — or that Memphis is either, for that matter — and that there’s no way she’s voting to save Nicole A. But she’s gotten in well with the “outsiders” that they think she’s willing to work with them.

The vote feels like it’s up in the air, but it’s still likely going to be Nicole A. leaving unless something major happens Thursday. And it’s really for the best. You know how in “Little Giants” (1994) Spike was “bred for football glory“? Well, Nicole A. is not bred for “Big Brother.” That’s not a diss — most of us are not — but she’s not great at this, and her horrible gameplay and reads this week really brought out the worst in her and dragged down the game and the house. Doing back-to-back seasons was probably a mistake since Season 21 was so toxic and she didn’t really have time to process it before returning. Let’s hope she stays off the internet for a while because it’s already eating her alive.