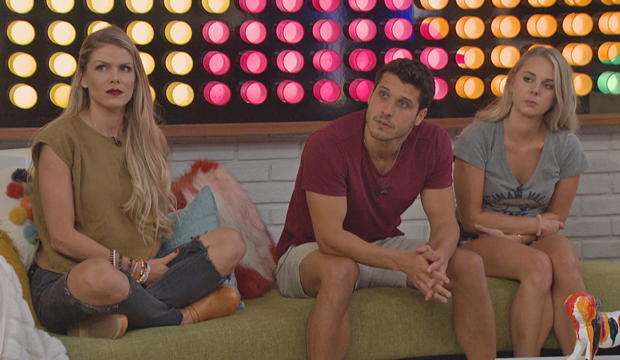 Last week the All-Stars of “Big Brother 22” sent Ian Terry to the jury house, making the former winner the first player to sit on the panel that will decide who wins. Still in the running are 10 houseguests, including the only other winner, Nicole Franzel, who sits comfortably in the six-person alliance called “The Committee” that has so far ruled the game. Can Nicole outlast the nine other players to become the first person to win twice, or did the target on her back just get bigger with Ian out of the game?

Below we offer up our first power rankings of the season, briefly assessing each of the remaining players and their chances to win. Do you agree or disagree with our order? Sound off with your own thoughts in the comments.

After winning the first HOH comp, Cody has remarkably been able to get away with doing not much else. Since then he did win a POV comp, but with the entire house again Janelle Pierzina and Kaysar Ridha that week it was probably the easiest decision to make (to not use it). Though Julie Chen-Moonves keeps telling the ousted houseguests that Memphis is the leader of “The Committee” because he “started” it, we all know that Cody is the true leader of the group. His early alliance with Nicole has shown significant influence over her and his side-alliances (most notably the one with Enzo and Tyler) have kept the target off his back. Hard to say at this point whether Cody’s hands-off approach to the game will get him another second place or if he can best his previous showing with a win.

It’s really hard to imagine anyone not in “The Committee” winning the game at this point, but if any of the outsiders have a chance it’s Enzo. Not only is Enzo closely tied with two members of the alliance (Cody and Christmas, separately), but he has the kind of personality that draws everyone in and gets them to trust him. He’s been competitive in almost every comp and never goes into them with the mindset of losing on purpose.

Nicole was always one of the most unlikeliest of winners in her first two times playing, but she won one of those times so realistically she should never be underestimated. She knew that keeping Ian in the game was the biggest shield she’d have against her status as a winner so now that he’s out she’ll have to work really hard to make the “I’m not a threat” strategy believable. What she has going for her is that she’s not great at competitions and that there are so few other women left in the house — surely the men will want to go after one another soon. The thing is that the closer Nicole gets to the end, the more dangerous she becomes because it’s hard to say one way or the other if the jury will want to give Nicole a second win or if she’s the perfect person to take to the finals because the jury won’t want to give her a second win.

Prior to this week, Memphis was looking like he was sitting so pretty that he’d willingly let his alliance do all his work for him. He won an early HOH and used that to strong-arm a lot of the houseguests into doing what he wanted. Hard to tell if he realized it at the time, but a lot of people were put off by his ego at the time and many of them caught on to the ways he was attempting to manipulate them. Fast-forward to this week and he’s now won a second HOH and proving yet again that he wants to preserve the interests of “The Committee” by nominating Da’Vonne and Kevin. In all, Memphis has an interesting strategy of playing really aggressively when he has power and very low key when he doesn’t. For that reason I think many of the players don’t see him as winning material and so they could start seeing him as the perfect goat to take with them to the finals — but if they do that, I think they’ll have a tougher battle against him than they anticipate.

Christmas had a really bad week as the HOH, despite remaining fiercely loyal to her alliance. Her flare ups with Da’Vonne and Bayleigh Dayton showed her true colors as a player: more cutthroat and competitive than she otherwise likes to let on. I think a lot of people took notice of how strong-willed she is, and even how committed she was to keeping Tyler around (her “untouchable” that she refused to name). That being said, I do think Christmas is playing with a bit of agility, building up side alliances and connections with people in the off-chance that she’ll need them down the road. She has a curiously strong bond with Enzo that might help make her the fourth wheel to the bro alliance of him, Tyler and Cody.

Honestly, Tyler should be ranked higher here, but everyone knows he is the most threatening player left in the house. Not only is Tyler well-connected, he’s also well-liked and great in challenges. While the signs do point to his core alliance with Cody and Enzo remaining strong until the end, his tension with Dani will come to a head at some point and he’s just as likely to be the victim of that battle as he is to win it. Christmas is a key player in Tyler’s game going forward because she’s his mouthpiece to the other women in the alliance, Nicole and Dani, who will likely come for him before they come for Cody or Enzo. If Christmas can work some magic on them then perhaps he can escape being the first (or second) casualty of “The Committee.”

SEE ‘Big Brother 22’ spoilers: This dissension about the nomination plan might be the most exciting thing of the week

When in doubt, nominate Kevin. That’s the way most of this season has gone for Kevin so far and it looks like it’s going to continue to go that way until for at least two more weeks. To put it simply, Kevin has to win an HOH if he has any hope of staying off the block in the next few weeks and making a much-needed dent in the alliance. That being said, the second he’s available to be on the block again, he will be and once Da’Vonne and David are out the weekly pawn will become the target.

As much as she whined about her HOH week, Dani had the game in the palm of her hands in that moment and she stupidly let it go. When Dani nominated Ian as the replacement and Nicole made a big to-do about trying to save him, Dani should have used that to her advantage in order to take Tyler out. Doing so would have accomplished a number of things to benefit Dani’s game: 1) solidify a bond with Nicole, 2) given her an opportunity to blame Nicole for it, 3) reinforce her bond with Da’Vonne, 4) created an opportunity to use Kevin, David, and Da’Vonne as numbers to go against “The Committee.” And I’m sure there are others, but shouldn’t that all have been enough? Instead Dani showed her cards to the rest of the house and betrayed the first member of the jury. Now she’s a sitting duck at the bottom of the alliance and Tyler has his sights firmly on her back.

One of the main reasons this season has been hard to watch is that Da’Vonne, in her attempts to downplay her emotional side, played so low key in the beginning of the game that it allowed “The Committee” to remain undetected while the people Day would need on her side later (at this point) were picked off. There is a whole list of reasons why Day had to play the game the way she did, but in the end deciding to be a floater will be her downfall. By the time Day was ready to rally players against a dominant alliance it was too late and now she finds herself on the block for the second time and this time she’s the biggest threat to the alliance left in the house. Cue: Da’Vonne-walking-out-the-door gif.

We were all rooting for you, David. We really were, but my oh my has David’s game been one silly disaster after another. I don’t think we’ve ever seen a player this clueless in the house, certainly not in an all stars season, or one forced to work entirely on their own for so long. Even when Da’Vonne and Bayleigh would vow to protect him, David would put his foot in his mouth in a way that would put them off. Look, he’s trying really hard and he’s probably got in tougher in there than anyone because of how everyone is refusing to play with him, but there is no way that David is going to win the game. I’d be shocked if he got to the finale, let alone earned more than a single vote from the jury.