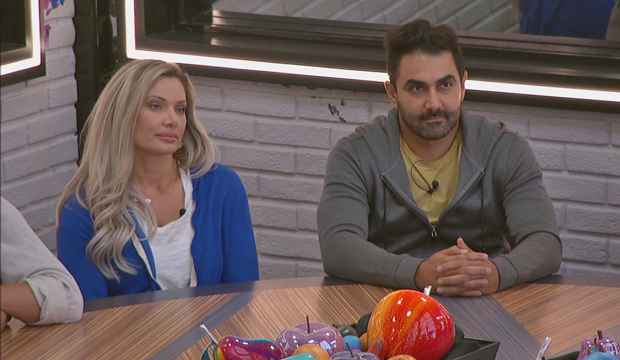 On Thursday’s live episode 10 of “Big Brother,” the houseguests will vote on the Week 3 eviction. The lineup pits Janelle Pierzina and Kaysar Ridha. Who do you think will be bounced by the other remaining houseguests on #BB22? Vote in our poll below and sound off in the comments section. And keep reading if you want “Big Brother 22” spoilers on the way it looks like the eviction vote is going to go on the August 27 episode.

During last Thursday’s live show, Tyler Crispen won the Head of Household competition. The season 20 runner-up tapped two of the veterans from seasons 6 and 7 — Janelle and Kaysar  — as his eviction nominations. They all took part in the Power of Veto competition on Saturday as did the first two HOHs (Cody Calafiore and Memphis Garrett) plus Bayleigh Dayton.

In the end, Cody won this puzzle challenge. Over the rest of the weekend, he resisted lobbying efforts to backdoor another houseguest. At Monday’s POV ceremony, he opted not to remove either Janelle or Kaysar from the chopping block. Since then, Janelle and Kaysar have been campaigning for votes.

Leading the charge against Janelle is Tyler, who has a slew of the other houseguests onside: both previous HOHs (Cody and Memphis) plus the other men in the house (David Alexander, Kevin Campbell, Enzo Palumbo and Ian Terry), as well as four of the remaining women (Christmas Abbott, Dani Briones, Nicole Franzel and Da’Vonne Rogers).

As of this writing, the only houseguest who may vote for Janelle is Bayleigh. And even that lone voice raised in support could still be muted. Bayleigh may fold and make it unanimous that Janelle is the third woman in a row to leave the “Big Brother 22” house.

Vote in our poll as to which of these pair you’d like to see evicted on August 27. And be sure to sound off in the comments section with your thoughts on #BB22 so far.