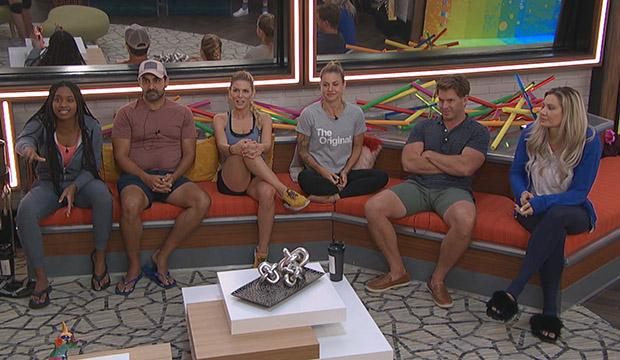 This week is just a march toward the inevitable on “Big Brother 22: All-Stars.” Cody Calafiore won the Veto and there is no way he’s using it on Monday, so Janelle Pierzina and Kaysar Ridha will remain on the block, and the former is outta here unless she can work up some miracle.

Janelle, of course, is not rolling over and dying. She’s still campaigning — to stay, not against Kaysar — and encouraged Kaysar to do the same. The problem is she still thinks she can work with Dani Briones, who is in four different alliances, is having the time of her life bashing Janelle with Nicole Franzel, and is being a rat (even her dad thinks so). Immediately after their convo, in which Dani claimed that she wanted to work with Janelle until she allegedly started spreading lies, Dani rehashed it to Four Prime.

Janelle does seemingly have an ally in Bayleigh Dayton, who knows she’s stuck in the middle but can’t really do anything at the moment. She wants Janelle to stay over Kaysar because she thinks Janelle would be able to do more damage. Plus, it’s not a great look for three women to leave in a row (also, all the comps except the Safety Suite won by Christmas Abbott have been won by men). They decided to work on votes from Da’Vonne Rogers, Kevin Campbell, David Alexander, Memphis Garrett and Dani, with Bayleigh also suggesting Cody and Enzo Palumbo. Oy. That should’ve been Ian Terry, not Dani.

Bayleigh put out feelers with Dani, telling her she’s worried about being alone after her “side alliance” in Janelle goes. Dani rambled something about taking one for the team — the super fake Slick Six — because they’re the priority.

“Janelle is saying Cody’s name, Tyler [Crispen]’s name, Nicole’s name, my name, Ian’s name. When she is saying three people’s names in our alliance, that’s a problem,” Dani said. “If we want to make it to the end, we have to back them.”

“OK, but Nicole and Ian aren’t in the Slick Six, so why does it matter if Janelle is allegedly saying their names?” is what Bay should be thinking.

Dani, naturally, wasted no time spilling their convo to Cody, Enzo and Tyler. Bayleigh and Day eventually joined, during which they all establish that Janelle is leaving this week. The most hilarious part of this was when Dani thinks Tyler would get any potential fan-voted power instead of Kaysar after Janelle’s gone. Kaysar would probably win by a bigger landslide now than when he was voted to return in Season 6. They also all reassured Bay that they’ve “100 percent” got her back after Janelle goes. But as soon as BayDay were nowhere in sight, Dani started ratting on Bay again, telling Nicole and Cody that Bay said she wants to backdoor Memphis, which was not what she said.

“That lets me know you have trust issues ’cause you are doing sh– behind what’s going on,” Cody said.

Oh, you mean like playing the game? The Slick Six isn’t even a real alliance for you. The problem with the recent seasons is that all of these majority alliances take on a self-righteous air about them — as if the house is a tyrant state and no one else is allowed to make any moves except them or have dissenting thoughts. And when an outsider (Jaysar) or a fringe ally they’re just using to further their own agenda (Bayleigh) figures them out or are voicing concerns, they get morally superior about it. How dare someone play the game that’s built on strategizing and deceit, right? Only they can do it! Tyler has every right to target Jaysar since they did figure out his alliance, but you don’t have to act so indignant about it, like they broke some rule to do it when you outed yourselves with your get-togethers.

Bay and Day are now resigned to Janelle leaving, but Bay ostensibly seems reassured by Dani’s comment that Tyler is not after her. Day pointed out that they are in the bottom of the Slick Six, to which Bay said they need to start “nourishing” their relationship with Tyler now. They decide that they need to throw the HOH to Kaysar if it’s just them left.

Meanwhile, Jaysar are not stressing at all or as much as the other side wants them to be. They did completely clock Kevin gaslighting Nicole Anthony, which in turn “destroyed our credibility in this house.”

Janelle: Nicole A is the one that told Nicole F everything I said about her.
Kaysar: You think so?
Janelle: Mhm. #BB22 pic.twitter.com/UvJf3m5Flb

Janelle: I feel like it had to have been Kevin that was pushing that agenda.
Kaysar: Yeah. I'm telling you, I don't have any proof, but he probably like, mentally broke her.
Janelle: Yeah, it's too bad. I'm sad about it. That destroyed our credibility in this house. #BB22 pic.twitter.com/5Kq6FYnepW