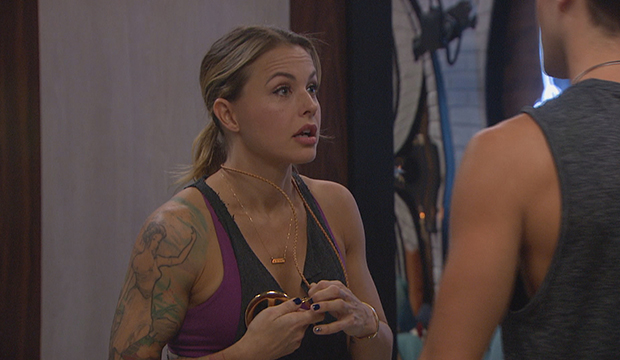 Tuesday was even duller than Monday in the “Big Brother 22” house since there’s not even a Veto ceremony to break up the day. Tyler Crispen got a brief glimmer of hope thanks to everyone being annoyed as hell by Christmas Abbott, but not annoyed enough to completely move the target back to her, so talks continued to look ahead.

Everyone pretty much avoided Christmas all day and vented to each other about what a pain in the ass she is with her “me, me, me” ‘tude. Nicole Franzel got in the sickest burn when she told Cody Calafiore that she could recite Christmas’ entire birth story of her son, whose birthday is Thursday (so we won’t get “on my daughter’s birthday” 2.0), and wishes that were a comp. Memphis Garrett — who, you know, is actually in an alliance with her — can’t stand to be around her now and said that Christmas is lucky she’s sitting next to Tyler or she would be heading out the door Thursday. Cody was all, “Ditto, your ass would be grass.”

Cody and Enzo Palumbo later discussed cutting Christmas because they’re highly irritated by her, but they never really got serious about it. It didn’t help that Nicole crashed the party and pushed hard for Tyler to go again. So the plan is still to boot Tyler this week and Christmas next week. Enzo said he would nominate Christmas and Memphis, and he expects Memphis to put up Nicole and Christmas with Nicole as the target.

SEE ‘Big Brother 22’ spoilers: Cody changing his target is the only remotely exciting thing this week

That latter combo was actually what Enzo pitched to Memphis earlier, to which Memphis said they have to convince Cody to evict Nicole. Memphis doesn’t want her around because Nicole’s won before and he’s worried about Cody and Nicole’s final two. But Enzo’s loyalty — like almost everyone’s this season — appears to be with Cody. He cam-talked that he has to evict Christmas next week because of Memphis’ final two with her so he’ll have two people, Memphis and Cody, willing to take him to the final two, and he thinks both would be willing to cut Nicole. Cody told Enzo that Nicole should go after Christmas so they can get to final two. Is he just telling Enzo what he wants and Nicole is still his No. 1? Unclear. But even then, Nicole would definitely take Cody over Enzo, so he better hope Nicole remains hopeless in comps.

Meanwhile, Tyler did his best to campaign. His most salient argument to Cody and Enzo was that if he stayed, it would be four versus one (Memphis) instead of three versus two. Enzo wouldn’t be straight with him, while Cody decided that he would tell Tyler before the eviction that he’s going so he won’t be blindsided. He won’t be, though, because he pretty much expects it and thanked live-feeders all while everyone was bitching about him and how he has to go. Some things never change.