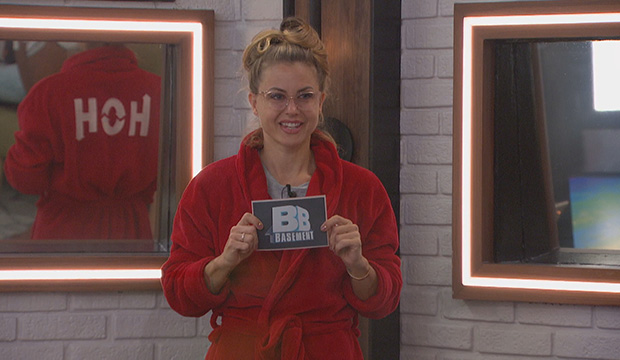 The nightmare was, in fact, Christmas Abbott in the “Big Brother 22” house on Monday, starting the first major fight of the season with her two nominees, Da’Vonne Rogers and Bayleigh Dayton, that had her own allies side-eyeing her.

It all built to this thanks to Tyler Crispen, who on Sunday wanted to get backdoored as a way to make amends with Bay and Day, and to be part of the bigger picture vis-à-vis Black Lives Matter. The truth is he wants to go home, but instead of self-evicting, he was trying to get voted out (this way he keeps his stipend). He asked Christmas to use the Veto and backdoor him, though that conversation was blocked on the feeds, and for about 12 hours, it seemed like Christmas was going to. It was looking so good that Christmas, Day, Nicole Franzel and Dani Briones even formed an all-girls alliance called the Blitzing Bombshells with the option of adding Bay. But by Monday morning, Christmas, who would lose her final two ally if he left, basically told him she wasn’t going to do it. Tyler, however, never gave BayDay a heads up and even coached Bay on her Veto speech to implicate an unnamed person (aka him) for all the drama involving Dani and who was targeting whom. Christmas did not use the Veto, so BayDay remain nominated, and Bay is likely leaving on Thursday.

BayDay were obviously perplexed, but everything was cool until Christmas and Day’s chat in the bathroom around 10 p.m. (watch below). Day asked about the Tyler situation, to which Christmas kept deflecting that it wasn’t her job to send him out (um, what?) and that Bay didn’t name Tyler in her speech, so she couldn’t nominate him. Day clocked her at every turn, pointing out that Tyler said he would have a house meeting to tell everyone to vote him out, and asked Christmas if this had to happen before the meeting, but Christmas ain’t quick on the draw and tried to avoid answering. “I just asked the question,” Day repeatedly said before telling her that Bay feels betrayed because it seemed like Christmas had their backs but then nominated them.

Christmas lost her sh– and started yelling at Day. Enter Bay, who calmly asked what’s going on, only for Christmas to screech at her and clap in her face like a lunatic. “Get your fingers out of my face. I’m talking calmly and you want to yell. You raised your tone and I have been nothing but nice. Stop with all of this because I cant do that to you,” Bay told her. More yelling ensued before they parted ways.

THE FIGHT TOOK A HIATUS THEN RECONVENED #BB22 pic.twitter.com/LTwxRMrQAO

Fight aftermath: Da'Vonne and Bayleigh talk in the backyard. It starts after Da'Vonne left the bathroom while Bayleigh was still talking to Christmas, then Bayleigh joins Da'Vonne outside pt 1/2 #BB22 pic.twitter.com/fI95FtxujY

If this were any other fight in the “BB” house, it would just be some mindless fun drama, but the microaggressions and downright racist comments Christmas had made during her HOH reign made the whole thing heartbreaking. On Friday, Christmas — who has lamented about women getting evicted only to nominate two women — was so worried that Bay and Day would “cut” her, get her “shot” (??) or stick a “fork” in her face for nominating them. (Let’s also not forget who has a history of violence here.) They, of course, were chill about it, and it was Christmas who spent like 20 hours sobbing in bed, acting like she was the victim and had to be comforted by her nominees.

Christmas: Is she gonna cut me when I put her up?
Tyler: Who?
C: Bayleigh

Christmas: This is before fucking noms. How do you think I feel? I'm gonna get shot. Somebody's gonna put a fork in my face today. I'm just sayin..I'm scared, & I'm not easily spooked.#bb22 pic.twitter.com/CxFdcVqejT

She kept up with the victim noises (shout-out to Cody Nickson!) after Monday’s fight, calling Bay and Day bullies as if they were the were ones aggressively yelling in her face first and clapping their hands. Bay and Day have talked numerous times in the house about how they have to keep their cool to avoid the Angry Black Woman stereotype (especially since Bay already had her infamous blow-up with Tyler in Season 20 and another one on “The Challenge”), and Monday was no different.

“Let her do that. You can go at 70 percent volume and everybody is going to view it at 150. That’s the unfairness of how these things go,” he replied. This was the first intelligent thing David has said all season.

The other houseguests did retells of the fight, and all of Christmas’ fellow Committee members took BayDay’s side, agreeing that Christmas instigated it for no reason. Nicole and Dani even comforted Day, who “can’t f—” with Christmas going forward. RIP Blitzing Bombshells Sept. 6, 2020-Sept. 7, 2020.

“You did nothing wrong. One hundred percent when you come out of this, no one is going to be looking at you,” Dani told Day.

“I’m tired, Dani. I’m tired of being an outcast,” Day said. “I just want to be able to have the same opportunity to get ahead in this game like everybody else.”

Now, you can be cynical and think they’re all on BayDay’s side as a game move, but they’re also aware, unlike Christmas, of the privilege that white people have. “I think it’s more that Christmas can do it,” Cody Calafiore observed, referring to her short fuse. “That’s what pisses [Bay] off.” “I don’t blame her,” Dani said.

The rest of the week ought to be a blast now (*sarcasm font*).