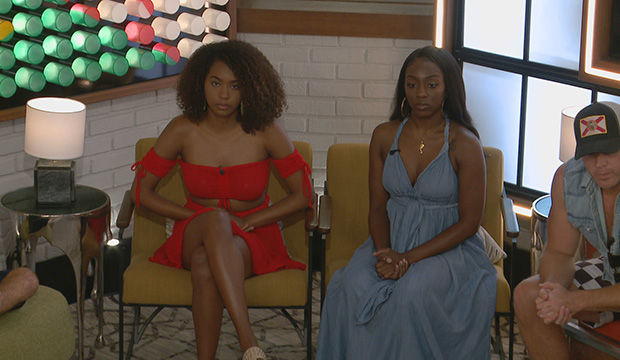 Wednesday was another quiet day in the “Big Brother 22” house. Nothing’s changed in terms of Thursday’s eviction: Bayleigh Dayton‘s still going. She and Da’Vonne Rogers did some light campaigning, never fully campaigning against the other, but the most notable thing they both did was kiss and make up with Christmas Abbott.

Christmas, finally done stewing, apologized to each of them separately, saying she’s sorry for hurting their feelings and for raising her voice. They both accepted and agreed to quash it. Christmas even told Day she wants to continue with the Blitzing Bombshells and assured her that she wouldn’t have to worry about going up if Christmas wins HOH again. Is Christmas sincere or is she just doing damage control since one of them is staying and might target her? Probably the latter.

Bay and Tyler Crispen also talked things out. The edit in Wednesday’s episode was wild, giving Tyler the Sad Hero edit while painting Bay as the reason Christmas did not use the Veto. It also left out how much Tyler invoked Black Lives Matter when telling his plan to BayDay and that he had helped Bay with her Veto speech knowing that Christmas wasn’t going to go through with the plan. Gotta protect the Golden Boy.

Tyler, though, is on thin ice with a lotta people. Dani Briones told Day that it was just Tyler, not him and Cody Calafiore, who was behind Davidgate. But at the same time, Day is low on Dani’s totem pole. She, like Cody, wants to split up Day, Kevin Campbell and David Alexander (you know, anyone not in her alliance who also happen to be the remaining POC) next, but would save Day for last so she won’t get mad.

Day is a hoot and can have incredible intuition, but she can also be frustratingly stubborn and messy. Kevin, who’s shed some of his whininess, has finally realized that he’s screwed against the majority alliance if he, Day and David don’t band together. Kevin told Day that David has been campaigning against Day to Tyler to see if that gets out anywhere — one of David’s inane tactics of covering his tracks. Day, of course, is pissed and thinks David is coming for her. Kevin “guaranteed” her that David’s not, told her not to target David or use him as a pawn, and tried to make her see the bigger picture: The three of them have to work together now.

“David is one of your people you need to win [HOH],” Kevin insisted. “He is a weapon that we have in our arsenal that’s not the best weapon, but we can’t be like, ‘Eh, here’s a grenade that we don’t need, throw it away.’ We need every weapon we have. We’re about to go down. We don’t have the luxury of throwing away a good-ass grenade.”

“But he is making dumbass decisions,” Day said. (True.)

“We know that, but we cant be brushing him off,” Kevin replied. (Also true.)

You know you’re doing something wrong when Kevin is making sense. Day agreed to give David a chance, but who knows what she’s really thinking. You’d think she’d be smarter than to waste an HOH on David, especially since she’s about to lose her top ally and was just burned by Tyler, but this is the baffling obstinance of Day that rears its ugly head more often than not.

But let’s just hope for a power shift on Thursday night.