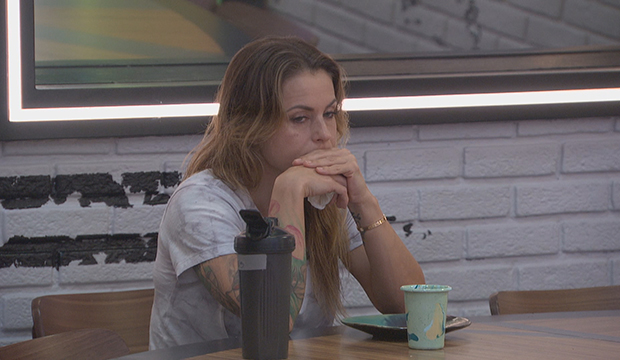 Well, at least it’s Thursday so we can end the most boring week on a season of boring weeks on “Big Brother 22” yet. Nothing happened Wednesday. Shocking, we know. Christmas Abbott made one final pitch to Cody Calafiore, but this time he actually shut her down.

Christmas argued again that taking Nicole Franzel to final three is a bad idea since she’s a former winner and she’ll likely have some key jury votes from certain people with whom she was friendly and who are probably impressed she made it to the end again. Cody, probably tired of “uh-huh”-ing, told Christmas that there’s nothing she can say that will affect his decision (because, you know, he’s already made it) and he will do what’s best for his game. Translation: “Leave me the hell alone.”

Once Christmas was gone, Cody complained to feedsters about Christmas’ go-to “transparent” campaign tactic of telling people they can’t beat the person they’re keeping. Well, Cody, that is true for most people, but not you since you know you’re likely going to beat everyone remaining. But also, the irony is that for the past two weeks, Tyler Crispen and Memphis Garrett were evicted because they’re bigger threats than Christmas. She does, however, have a very, uh, inflated sense of her abilities.

Christmas knows she’s done for. She vented to Enzo Palumbo about how Cody never responds to her when she campaigns, and she wants him to stop the B.S. excuses on Thursday and just say he’s evicting her because he had a pre-game alliance with Nicole and they had been coached by Derrick Levasseur. If only. Enzo said he tried to convince Cody to boot Nicole, but he won’t bite. He didn’t try that hard.

At the end of the night, Christmas cam-talked that she knows she’s leaving and that it sucks Cody’s evicting her “because I’m the better player.” Lol. She thinks she’s being punished for her one wrong vote to evict Nicole during the triple eviction and that she might be in a better position had Da’Vonne Rogers won the HOH she won (by default) because Cody would’ve been targeted. Well, Christmas, for what could be the first time, everyone agrees that they wish Day had won that HOH over you.

So it won’t be a very merry Christmas on Thursday.