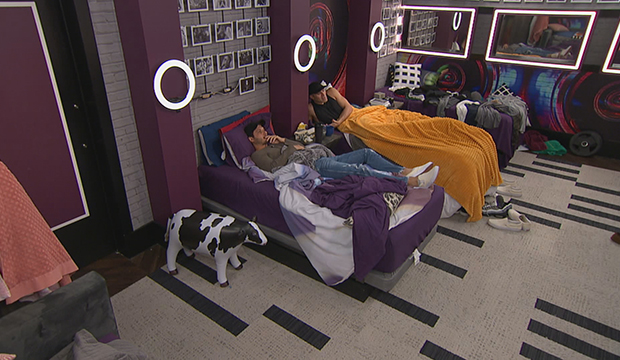 So that’s that. Cody Calafiore won the Veto on “Big Brother 22” on Saturday, which means he’s locked for final three, which means he’ll get to final two, which means he’ll win. Yawn. Look, the odds were against Christmas Abbott to win the Veto, but that was the inkling of excitement this season needed after going by the book every step of the way.

Cody is obviously not going to use the Veto and he’s the sole vote to evict this week, so the final three will be him, Enzo Palumbo and Nicole Franzel. Christmas seems to have accepted her fate. She was pissed that she was nominated because she thought Enzo had her back, which is understandable, but also, there’s limited options and she should’ve known he wasn’t going to turn against his boy. They talked it out on Sunday, with Christmas saying she wished he had given her a warning. Enzo apologized and said that Cody was his Memphis Garrett, so he didn’t want to touch him. Christmas knows she’s getting cut since Nicole doesn’t seem worried at all and she would be “f—ing shocked” if Cody kept her. She had casually campaigned to Cody and he said he would consider all his options, but they both know they’re just BS-ing each other.

Enzo concurred that Cody has probably already made up his mind, though he didn’t specify which way. He tried to play down his relationship with Cody, saying that he’ll probably end up in third again (accurate) because Nicole and Cody are comp beats. He later concluded that Nicole would take Cody to final two, but thinks Cody would take him over Nicole. The obliviousness is cute.

Enzo really does think Cody will take him to final two and even said to his face that “Nicole knows that I am not taking her and she pretty much knows that you are not taking her.” Cody, of course, is rock solid with Nicole for final two. He’s really got it made. If Enzo and Nicole were smart, they’d take each other to final two if they’re the final HOH, but both are hopelessly devoted to Cody. Nicole vs. Enzo is the only interesting final because Cody will crush everyone else. The other thing is that Cody will probably be the final HOH, so he’s guaranteed a chair anyway.

Needless to say, Enzo wouldn’t be staring down the barrel of third place again had he cut Nicole during the triple eviction. But a bro’s gotta bro. So the Veto won’t be used again — it was only used twice this season, and both on Kevin Campbell — and Christmas probably won’t campaign too much because she knows, so now it’s a slow march toward the inevitable.