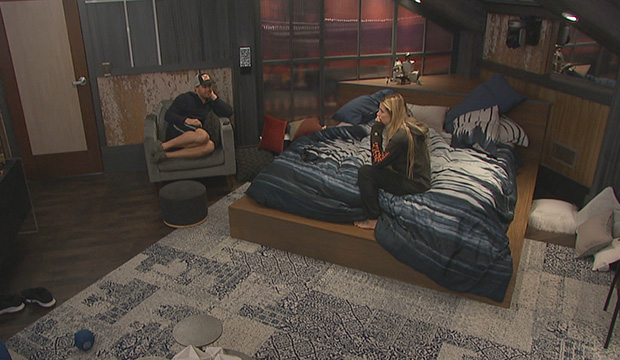 Monday was yet another humdrum day in the “Big Brother 22” house. Cody Calafiore did not use the Veto (duh), so one of  Kevin Campbell and David Alexander will be the first evictee of Thursday’s triple eviction. All signs still point to Kevin since that’s what Cody wants. But some of the Committee are pushing back while others are trying to look ahead.

This dissension will ultimately amount to nothing because, well, when has it ever this season? But Dani Briones still wants David out, and obviously Memphis Garrett supports bouncing his nemesis too. “I don’t understand why Cody is the one that wants it so we are all doing it,” she complained to Memphis about evicting Kevin. “Why cant we discuss the options? It’s kind of annoying.”

Yes, the sheep mentality of new school is the worst, but this is fresh coming from Dani since she was the one scolding Nicole Franzel that she could not, under any circumstances, vote to keep Ian Terry when she was HOH two weeks ago. Things are only unfair when you don’t get what you want, right? There is another aspect to this: Last week, Dani made Cody promise that if she was onboard with evicting Da’Vonne Rogers that David would be the target this week. Dani, of course, actually voted to evict Kevin, but won’t own up to it. But now Cody has reneged on his promise, so she’s peeved.

SEE ‘Big Brother 22’ spoilers: David unintentionally causing chaos is the only good thing about this season

Dani and Memphis think Cody, David and Tyler Crispen have something going on, and they both think David would nominate the two of them if he won HOH. “I am trying to process it as we will get David next week, but it bothers me,” Memphis said. What are the chances David survives the triple? They all expect a double, so the triple is definitely going to throw them for a loop. Here’s hoping Julie Chen Moonves just announces a double and then after the second eviction is like

Meanwhile, Cody and Enzo Palumbo spent ample time discussing future evictions now that it’s time for the Committee to turn on each other. Cody explained to Enzo that he didn’t want to nominate Dani or Christmas Abbott this week because they are coming for each other. Just another way to say it’s “too early.” He claimed he will nominate the two of them on his next HOH, after which Enzo pointed out that they need to cut Christmas to get Memphis and Tyler back for themselves. Oh, good, an all-male final four incoming. But Cody’s biggest wish is for Dani to win HOH and target Christmas and then for Tyler to win it and go after Dani so Cody can sit back, relax and not do anything. How bold.

Christmas had a talk with herself, going over all her relationships within in the Committee sans her nemesis Dani. Despite their final two from the beginning of the game, she has doubts about Tyler because of how wishy-washy he’s been about leaving the game — this “dishonors” her game. Sure. She feels most solid with Memphis and respects how he’s a man of his word. She suspects Enzo has a final two with Cody or Tyler even though he’s told her he wants to take her to final two. She feels comfortable with Cody, who is not her first target (mistake). She resents Nicole talking about being in the final two and doesn’t  want to be next to someone who’s won before or Dani, who got second place. Who’s gonna tell her that Cody, Memphis and Tyler also got second place?

After all that, Christmas came to the conclusion that she has no idea what to do if she wins HOH. Fitting for someone who did nothing to win her last HOH except stand up.

It’s gonna be a long week until the triple.