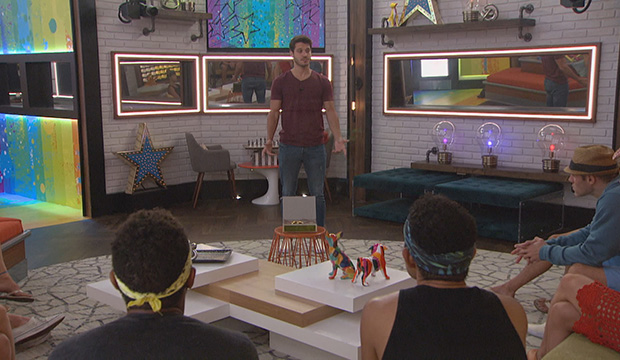 Wednesday in the “Big Brother 22” house was spent the same way most Wednesdays are: discussing future eviction plans instead of the direct next one. Except this time the houseguests think they’re planning for a double, maybe triple eviction, but they also don’t know why they would be told about it.

Listen, no one does. Guess the silver lining is that they’re so incredulous that they’d be warned about a triple eviction that they don’t believe it will happen. That means they still will be somewhat surprised on Thursday night, which is all we can cling to at this moment. Their skepticism over a triple amounts to two things: 1) Why would production hint at it? 2) They don’t think the show has enough time to do three evictions in one episode. Leave it to David Alexander to clock it: “Unless it’s a two-hour live special.”

“But I also don’t know why they would warn us about it,” Kevin Campbell countered, speaking for everyone. “They usually want us to be like, ‘Oh, sh–!'”

David agreed that doesn’t add up: “Why would they warn us? Why wouldn’t they just allow it to happen to get all of our, ‘Oh, sh–! Oh, sh–!’ versus us speculating, speculating and then let it happen. Then it’d be less ‘Ahhh!’ It’d be like, ‘Oh. Another double, guys.’ It’s gotta be different. They warned us in a way that made it seem like something’s gonna be different.”

SEE ‘Big Brother 22’ spoilers: Welp, the houseguests were warned about the triple eviction because we can’t have nice things

Look at David turning into a certified genius now. Memphis Garrett and Christmas Abbott basically had the same conversation later (and not unlike the one they had Tuesday night). Memphis doesn’t think it’ll be a triple because he doesn’t think production would tipped them off and he thinks a triple would be too “messy” to pull off after hearing about Canada’s format, in which an HOH nominates three people and houseguests vote for the person they want to stay. Or you know, they don’t have to copy Canada’s format. By the end of the night, most of them think Thursday will be a double, followed by a fast-forward week, so four people will leave in seven days. Close.

Meanwhile, Kevin continued to valiantly campaign, but it’s futile. The votes are not flipping, so he’ll be the first of three to go. Everyone else is organizing hit lists, with Dani Briones at the top of nearly all of them, followed by Christmas. Cody Calafiore believes Dani is overplaying and vows not to keep her if she’s on the block. Tyler Crispen thinks he, Cody, Christmas, Memphis and Enzo Palumbo would all evict Dani, so she’s a goner.

Nicole Franzel picked up her bussing of Dani, buttering herself up to Christmas by saying Dani is gonna hate her if she learns that Nicole told Christmas that Dani wants her out. She assured Christmas that she wouldn’t use the Veto on Dani. Christmas, however, fears Nicole will start winning comps and wants her out after Dani. The boys think Nicole and Dani are still close and that the former would use the Veto on the latter, but Cody believes they could convince Nicole not to. Tyler and Enzo don’t want to take any chances and said they would evict Nicole if she were on the block next to David.

It’s all talk until something happens, but one thing’s for sure from these conversations: Cody and Enzo are the safest because their names are rarely brought up. Sigh.