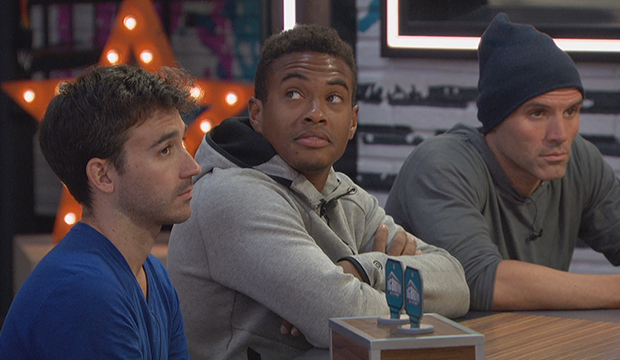 If you were mad at Memphis Garrett for his comments to David Alexander last week during the nomination ceremony, you might want to think about giving him an apology. David is at the big kids’ table, and oy. He does not belong. He’s already shown he’s a terrible player from his conversations, but he took it to the next level on Tuesday, blowing up two of his allies’ games in the process.

But first, we had to sit through two more excruciating conversations between him and Janelle Pierzina, and him and Kaysar Ridha. Excruciating because of David. Bless Janelle and Kaysar (and everyone) who tries to talk game with him and not lose their damn minds. It’s gotta be frustrating trying to talk to someone, let alone campaign, who makes absolutely no sense and is so inept at the game. This is basically David:

And this is all of us:

David being utterly clueless is bad enough, especially on an all-stars season, but it’s compounded by the fact that he acts all holier than thou and as if he’s some “BB” mastermind. This is your third full week on the show ever! Janelle has played more seasons than you have played weeks! He’s also like a child who gets stuck on one thing (in this case, last week and Nicole Anthony, whom he doesn’t think should’ve been targeted because she was America’s Favorite Player? Someone tell him that Janelle and Keesha Smith were AFPs too) and refuses to move forward. Jaysar each offered olive branches to him — Janelle pitched three weeks of safety — but he stonewalled them and told both they’re untrustworthy. We’ve already established that David has never seen the show, thus has never witnessed Jaysar’s loyalty, but imagine drawing this line in the sand with both nominees, one of whom is staying and whose help you might need in the future. Kaysar was getting fed up and called him out on his nonsense, to which David told him he hopes his credit rises. We’ll see who has the low credit after this season, dude. Janelle later vented that he’s a “f—in’ idiot.”

Kaysar: I'm hoping that you'll eventually extend an olive branch and we can actually have real conversations instead of this nonsense.
David: Well I hope that your credit increases. #BB22 pic.twitter.com/5tUZ5hzC02

That was just the hors d’oeuvres for David’s late-night shenanigans. During a pow-wow with Da’Vonne Rogers and Bayleigh Dayton, he, for some reason, claimed that Janelle told him that Day was trying to flip the votes against him last week (Janelle did not) and said that he also heard that from Tyler Crispen and Cody Calafiore (Tyler did tell him Day was rallying votes, which he had heard from Nicole Franzel and Dani Briones). Day got pissed and started crying that she threw her game away to protect David, whom, lest we forget, already told Bay to tell Day to calm down last week.

They each tried to “fact-check.” David inexplicably went to Kevin Campbell first, which is like the blind leading the blind. Kevin put the vote-flip blame on Kaysar, which is (surprise!) also not accurate. Kaysar was campaigning for Nicole A. and was seeing if the votes were there, but he wasn’t plotting a vote-flip. David then went to Tyler and came clean about what he told BayDay. Tyler was not pleased, to say the least.

At one point, Tyler lamented that he can’t believe he’s being screwed over by his own teammate. David agreed that that sucks. You’re the teammate, David!

Day touched base with Janelle, who denied she ever said that to David because, well, why would she? Day agreed that wouldn’t make sense. They then talked about how abysmal David is. “No offense but like, he’s the bottom of the barrel as far as players,” Janelle said, warning Day not to work with him anymore. “And why should we be dealing with a newbie on an all-stars season?”

Da'Vonne: Did you tell him (David) that you had me flipping the votes to Nicole A the week he was on the thing?
Janelle: Hell no! Why would I say you were flipping votes? #bb22 pic.twitter.com/UF90H2N1Ja

Janelle: No offense but like, he's (David) the bottom of the barrel as far as players. And why should we be dealing with a newbie on an all stars season? #bb22 pic.twitter.com/REt4iak6E1

SEE ‘Big Brother 22’ spoilers: Cody does not use the Veto

Janelle and Tyler later convened and commiserated over David’s ineptitude and the lack of all-star quality this season. “These people aren’t as good as they should be, for being an all-star season,” he said. Later in bed, Tyler, who told Janelle he knows fans will hate him for getting out Janelle on his HOH, dragged the show for its casting choices. “All-stars, huh? This is all-stars?” he said. “Great cast you guys picked here, man.”

Tyler talked to the feeds about tonight's drama, wanting to leave prejury, and gives a shout out to Angela #BB22 pic.twitter.com/rGY7oqJ3NN

Look, David got screwed last season and arguably deserved a chance to actually play the game — on a second chances season. He’s had a chance to prove himself, and he’s only proven to be out of his league and out of his depth on all-stars. To his small credit (no pun intended), he realized during his convo with Tyler that he screwed up and is not as good at this game as he thought he’d be. The thing is, Day considered changing her vote last week after Jaysar campaigned to her on Nicole A.’s behalf and David told her off via Bay, but she never spearheaded a vote-flip plan. She also made it very clear that she wanted to keep David because she didn’t want to vote out a Black man this early. Also, if Day had admitted to David that she was even thinking about keeping Nicole last week, he would’ve never let that go since he’s still stuck on Jaysar campaigning for Nicole A.

Even whoever’s manning David’s Twitter right now knows some (a lot) of his gameplay is indefensible, and is offering stick-figure drawings to keep the peace (do check out the drawings in the thread). Can we get this person in the house?

As an effort to show we are sincere in what we say, we are currently offering personal stick-figure drawings of your choice as recompensation.