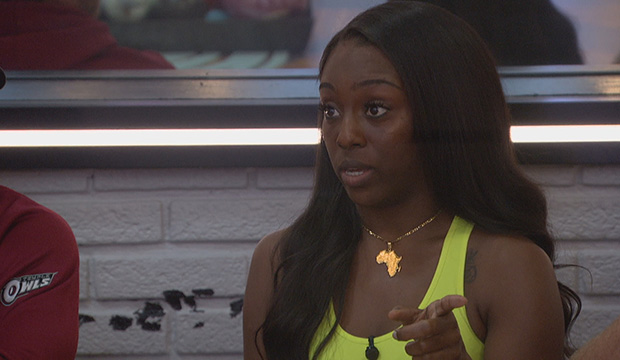 After a heated Monday, things were decidedly way more subdued in the “Big Brother 22” house on Tuesday. The biggest thing that happened was Cody Calafiore getting the news that his grandfather had died of cancer, after which the houseguests consoled him. Condolences to the Calafiores.

Game-wise, Bayleigh Dayton is still going to be heading out the door on Thursday. Everyone knows it. She, Da’Vonne Rogers and Christmas Abbott avoided each other all day, so they haven’t made amends or anything of the sort. Christmas spent the day trying to justify her behavior — because, you know, she already went through so much just nominating Bay and Day and doesn’t deserve to be “attacked.” Her revisionist history is that she didn’t want to do Bay’s dirty work of backdooring Tyler Crispen even though he had asked for this — though she did tell the truth to Dani Briones after she straight-up asked if Tyler had asked to be backdoored.

Christmas’ crowning moment was when she said this to Enzo Palumbo: “I am here because I think that I can show the ‘Big Brother’ community that you can play it with a little bit more integrity than what has been played.”

You know how some people just buy into their own delusion and narrative, facts be damned? Christmas is never wrong, you see. And she’s a total comp beast even though she’s won two HOHs for doing nothing.

Meanwhile, Day had a camera session with feedsters late at night. She knows the Blitzing Bombshells was a fake alliance (too bad she didn’t have this clarity about the Slick Six) and went over the blow-up with Christmas.

“The argument with Christmas, y’all saw how hard I tried to keep my composure while she kept yelling and yelling and yelling, and being condescending. And getting in my face. That was hard,” she said. “I pray that you guys saw the full extent of that fight. Because who really was at fault? Who really got crazy? Because it wasn’t me. And it definitely wasn’t Bayleigh.”

Oh, don’t worry, we did. Day knows Christmas is going around playing the victim and she also knows “for a fact” that Christmas has a power because she realized it during the comp (Day and Bay have figured out that Christmas, Dani and David Alexander have powers because they were all called to the DR before nominations). If she wins HOH, she plans on nominating Christmas and Tyler to flush out her power, and she’ll put up a bigger target if one comes down. “I have to win this next HOH,” she declared. “And I need to start taking shots. There’s no other way around it. I’m not going to be in their pecking orders.” It’s good that she plans on nominating Christmas outright since her power protects a potential renom.

After Bay’s inevitable eviction, Day shared that only trusts Nicole Franzel, Enzo and Kevin Campbell of the remaining houseguests — “surprisingly.” She finds it hard to trust David again after Davidgate. “I’m tired of putting on a fake face. I’m tired of it. Y’all know me,” she said. “These people make my ass itch. I hate them, a lot of them. If, when, Thursday comes and I stay in this house, game on.”

To think how differently this week would’ve gone had Day won HOH.