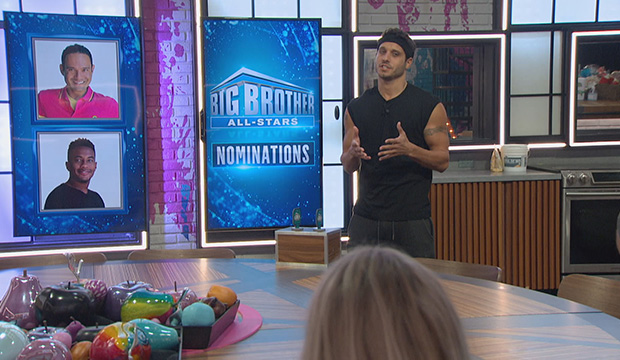 Just when we thought we might actually have something to look forward to on “Big Brother 22,” the show does the most ineffable thing possible — let’s call it “pulling a David” — and hinted at the impending triple eviction to the houseguests on Tuesday. Live shot of us:

Really, we should’ve seen this coming since everything about this season has gone to hell. The houseguests got a video message from Dr. Will Kirby on Tuesday afternoon in which he told them to think “three steps ahead.” Oh, and it was played twice to drive the point further home. They were all confused and came to the conclusion that there will be three evictions this week, but that the first eviction would be a fast-forward week on Tuesday or Wednesday with a double eviction on Thursday. Even David Alexander put the pieces together (to be fair, it’s not that hard of a clue) and asked Tyler Crispen if there’s ever been three people evicted in one week. Tyler said no (well, not in the U.S. version).

When no eviction happened in the evening, conversation shifted to it possibly happening on Wednesday. Memphis then spoke for all of us: “If nothing happens [on Wednesday] and they do a double on Thursday, why would they even hint to it? What’s the f—ing point? You ruin the surprise.” Preach, dude.

SEE ‘Big Brother 22’ spoilers: The Committee is starting to fracture, but no one wants to do the dirty work, naturally

Citing Will’s “three steps ahead” clue, Memphis told Christmas Abbott, “The only thing I can think of is that it’s three evictions.” Christmas: “A triple eviction?” Ding, ding, ding! But they immediately dismissed it because they don’t think there would be enough time (they don’t know Thursday’s episode is two hours) and because they think production would want to milk drama for the week. “There would be no drama with that or gameplay,” Memphis stated. Uh, when has there been any drama or gameplay this season?

So, for now, they haven’t exactly figured out it’s a triple eviction on Thursday, but chances are they will get there, especially when no eviction happens on Wednesday. Three going on Thursday would be the only configuration left. And we’ll be robbed of the bombshell being dropped on them and seeing them scramble. There was no reason to tip them off like this on a season that’s been more straightforward than a ruler. You can’t expect the unexpected if you’re gonna tell them what to expect.

SEE ‘Big Brother 22’ spoilers: David unintentionally causing chaos is the only good thing about this season

Will’s message did spur more conversations about the next targets, but it’s still more of the same with everyone in the Committee talking about cutting certain people but thinking/hoping someone else will carry out the deed for them. David and Kevin Campbell turned up their campaigning, especially the latter when he thought the first eviction was on Tuesday. He more or less told everyone he’d do whatever they want if he stays and confessed to Tyler that he had voted to evict him two weeks ago. He’s fighting, but sadly, his pink slip is already written. Everyone equivocated, except for Memphis, who, once again, was the only one who’s honest with the doomed nominee and told Kevin he’s evicting him because he’s more of a threat than clueless David.

Kevin had a sad cam-talk at the end of the night. He knows he’s a dead man walking and would need a “miracle” to stay. He regretted returning because it’s been a “terrible experience” and he doesn’t know why everyone keeps saying it’s been fun.

“This has been a terrible experience for me. I shouldn’t have come back be cause I had such a positive experience my first time. What was I thinking? I statistically was almost overwhelmingly going to have a worse experience. The odds of getting just as far are small,” he said. “People are saying, “This has been the most fun season ever. We are so united.’ I’m like, ‘Are you kidding me? This is the most horrific season ever.”

Look, he’s not wrong. And now our one shining light this week is nearly extinguished.