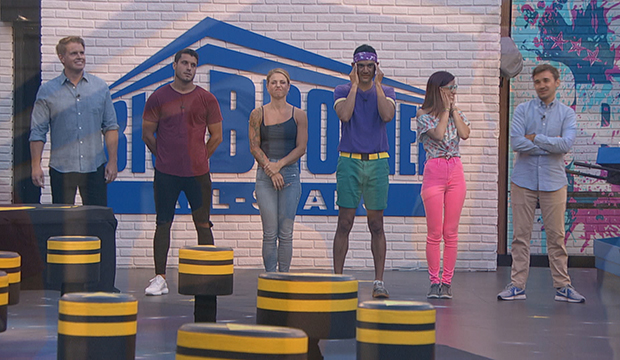 One of the great perks of a live move-in on “Big Brother 22: All-Stars” is that we don’t miss that first week of action and alliances forming on the live feeds. After Cody Calafiore‘s HOH win on Wednesday, the dealmaking commenced and it’s probably not entirely surprising how the house has split up so far in this nascent stage.

Cody’s initial targets were Kaysar Ridha and Janelle Pierzina, but that went out the window after Kaysar won the Safety Suite and named Janelle as his plus-one. Keesha Smith is now his backup target, and he’s considering nominating Kevin Campbell with her. So the two major sides right now are Team Cody and the old guard.

Team Cody
Nicole Franzel immediately gravitated toward her fellow Season 16 alum, and they declared each other their “ride or die.” They’re trying to play it off to the house that they’re not close/not working together, but people are coming onto them (see below). After Kaysar and Janelle won the Safety Suite, Nicole F. did not handle it well — poor thing didn’t get what she wanted — and sobbed for hours Thursday night, making everyone else go “WTF?!” She told them she was just tired. Kaysar: “I have never seen that in my life.”

Just like on Season 20, Tyler Crispen has made about 432 final two deals, including with Christmas Abbott and David Alexander. But his most notable alliance is with Cody, who is once again primarily working with dudes. They’ve talked about how they’re going to lay low in the game and not try to win comps so they don’t become big targets. Cody also likes David and things he’ll do whatever Cody and Tyler want. Two very confident bros here.

Dani Briones has also been chatty with Cody. He floated forming a bigger alliance to her, and she likes the idea of pulling in Memphis Garrett once Keesha goes with Nicole F., Tyler and Enzo Palumbo.

The Old Guard
Fourteen years later, Kaysar and Janelle can still show these kids how it’s done. Apparently they were the only ones to go for the Safety Suite, which “exposed” their alliance but also they were not wrong to since they would’ve been nominated. They knew from the get-go that they would be targets and made the right call. They’ve also figured out that Cody and Nicole F. are working together, and that Cody is likely to go after the older houseguests — they don’t want him targeting Keesha or Memphis, both of whom don’t feel safe. They imagine that once it’s clear Keesha is the target, Memphis will want to work with them. Kaysar also knows that Cody and Tyler are working together and wants to target them.

Nicole Anthony also straight-up told Kaysar and Janelle that she thinks Cody was going to nominate them. Kaysar trusts Nicole A. Trying to expand their troops, Janelle, who’s close with Ian Terry from Season 14, believes that he would work with them too (Ian has briefly discussed a “winners” alliance with Nicole F.). She is not as sure about Dani, which is probably for the best at this point.

Janelle is also friendly with Bayleigh Dayton, who is making sure that FOUTTE energy is alive and well on “BB22” because she didn’t think Cody and Nicole F. were working together. Girl. Janelle had to break the news to her. It’s unclear which way Bay is leaning because she does like Cody. Janelle also had a chat with Enzo, who is also onto the Nicody alliance.

Nicole A. has an alliance with Kevin and Da’Vonne Rogers. In a chat with Day, Kevin suggests the season could turn into new school vs. old school like on “Survivor.” Day thinks Kaysar and Janelle wasted their Safety Suite passes this week because she didn’t think they were the target. Kevin: “I feel like they might have been.” Day also thinks Kevin should be safe. Guess that FOUTTE energy is rubbing off on her too. In a later convo with Nicole A., Kevin tells her he suspects there’s a Tyler-Cody alliance and wants to pull in Ian before Tyler and Cody grab him.