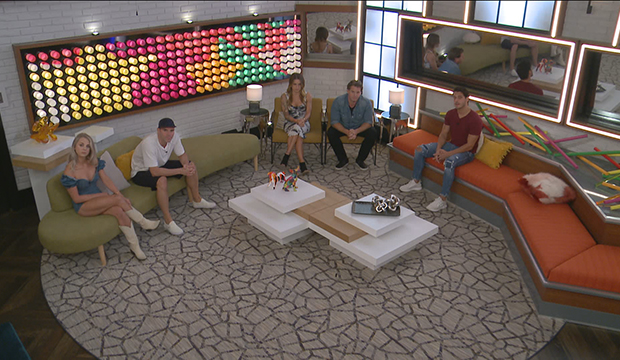 Did the jurors manifest this? They complained about how Enzo Palumbo needed to win more on Thursday’s “Big Brother 22,” and lo and behold, he goes and wins the final four HOH later that night. That means he’s locked in a final three spot without hitting the block this season. Final four HOH and nominations don’t matter, though, since it all comes down to the Veto, and that’s the only thing left that could actually shake up the game.

It’s simple: Christmas Abbott needs to win the Veto or she’s gone and we can basically make the check out to Cody Calafiore. If she wins Veto, she would cut Cody, and we’d actually have an interesting final three. Enzo fought to evict Christmas over Memphis Garrett, but now he knows he needs her, saying to himself that Cody wants her out, but he wants her in. He’ll nominate Christmas and Nicole Franzel to keep his boy safe and happy, but he knows it all depends on the Veto.

If Nicole had her way, she’d probably boot Enzo right now. Girl was pissed that Enzo won because it seemed like he was (gasp!) playing for himself instead of her and Cody. The gall! Per Nicole, Enzo showed his “true colors” during that comp because he wants to take Christmas to final three and she would’ve never done to Cody what Enzo did, which was apparently go closer to Cody on the board than to Christmas. Even Cody was like, “It doesn’t matter if he’s close if I’m three squares away.” But to Nicole, this was “eye-opening” because now she would take Christmas to final two over Enzo.

“That was so selfish. We are all playing this individual game, but I know how much you have done for him in this game, so it bugs me,” she ranted to Cody. Cody then claimed he threw the comp to Enzo, which LOL. Who is out here throwing the final four HOH? That is the one you want to win. Nicole then grumbled that Enzo better nominate Christmas and her because, she told Cody, he “owes you something.” You can’t make this up!

Everything about this conversation was deranged and hysterical. First of all, it doesn’t matter who he puts up because all that matters is the Veto. It would actually behoove Enzo to nominate Cody so that Enzo is the only person remaining who hasn’t hit the block, but he later told Cody he wasn’t nominating him. Second, these people’s entitlement is truly in a league of its own. No one is allowed to play the game except Cody and Nicole! And if someone doesn’t do what they want, it’s that person’s fault, and he or she is evil and dumb and selfish. Grrr! Third, Nicole is the safest person not named Enzo, and yet she is the one doing the most bitching. If Christmas is the sole vote to evict, she’s booting Cody. If it’s Cody or Nicole, they’re evicting Christmas. Nicole is not going anywhere and she is the most pressed.

Later, Enzo confessed to Cody that he’s scared of going to final three with Nicole because Cody might throw the final three HOH to her so she could cut Enzo; therefore, they should cut her first. Plus, she’s already won. Cody denied he would do this and pushed back on clipping Nicole, which should send up more red flares for Enzo.

Anyway, this is all just a waiting game until the Veto on Saturday.