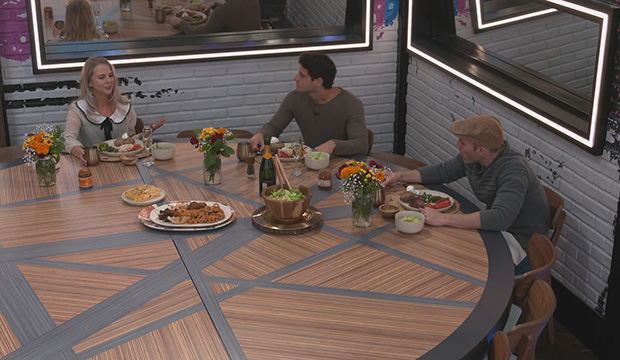 It’s just a slow crawl toward the finale on “Big Brother 22” now. Nothing, predictably, happened at all on Monday — they ate, slept, chatted, drank and played games. And we still have one more full day of this indolence. There’s nothing to discuss now since everyone either knows what’s going to happen for the most part, much to one person’s chagrin (you know who).

Nicole Franzel spent some time working on her final two speech and plans on mentioning her record of most days spent in the house. Yes, that’s definitely a reason for winning “Big Brother.” She doesn’t plan on dragging Cody Calafiore‘s game because he played well and they’re friends.

Cody hasn’t practiced his out loud at all, and of all three of them, he’s been keeping his cards closest to his chest. While Nicole and Enzo Palumbo have talked to live feeders the past few days about their plans and frustrations, Cody has remained tight-lipped about his true intentions. But all signs still point to him taking Nicole to final two. Honestly, he’s probably just so confident he’s going to take this in a walk that he’s not sweating a speech.

Enzo hasn’t practice a speech either, but that’s because he likely won’t have to give one. He’s been bummed out since his Part 2 HOH loss, though he’s accepted his third place fate, and didn’t even roll out of bed until 5 p.m. on Monday. Every now and then when he’s alone, he’d grumble to himself about getting third place again. When he hit the sack again like seven hours later, he groused, “She doesn’t have a chance with Cody.”

Enzo really thinks Nicole cannot win against Cody, which is understandable on paper since Cody’s resume blows Nicole’s out of the water, and chances are he will beat her if it’s the two of them. But it all depends on which way the wind is blowing with the jury and how bitter it is — the latter of which might not even have to do with Cody or Nicole considering how annoyed the other jurors looked last week when Dani Briones was stumping hard for Cody. We can all tell Enzo to pitch to Nicole to take him if she wins Part 3, but he already knows it’s a lost cause and had said he wasn’t going to go all out campaigning. It is funny how Nicole could make a huge case for a win if she does what Enzo’s been threatening to do all summer: make a big move and cut Cody at final three. But she’d rather play loyal than outright ruthless.