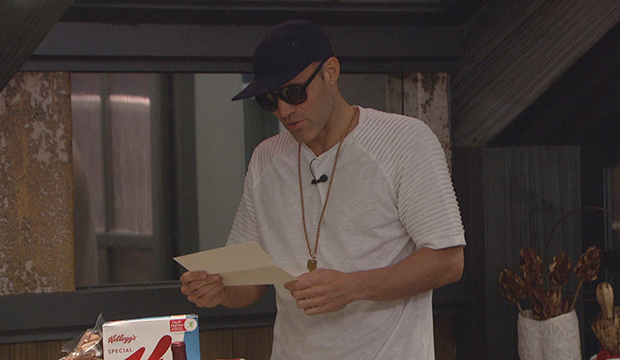 Can we just fast-forward to Thursday already? Tuesday was more of the same in the “Big Brother 22” house: sleeping, eating and pranks. Rinse and repeat. Christmas Abbott made another futile pitch to Cody Calafiore while Enzo Palumbo finally pondered if he ought to cut his boy at final three.

Enzo is still playing both sides here and trying to work that jury vote from Christmas by advising her on her pitches to Cody. He also claimed he’s been trying to talk Cody into evicting Nicole Franzel, which is not a complete lie since he has brought it up, but also a stretch since he knows the final three is all but set. He told Christmas to throw him under the bus to Cody if she has to and promise that she would take Cody, not Enzo, to the final two. Christmas did all those things, adding that he would definitely beat her and she’s not even asking Cody to take her to final two. She bussed Enzo by saying Enzo betrayed her because he had told her he was never nominating her again after his first HOH and that he was initially onboard to boot Nicole in the triple before changing his mind.

SEE ‘Big Brother 22’ spoilers: Like you, Cody can’t believe how good he’s had it

Cody did his usual nodding along here without adding anything that would betray his intentions just to get through the convo. He didn’t accept or promise anything, only telling her that he has a lot to think about right now. Christmas made some good points — she would be an easy beat for any of them to go up against — but Cody also probably knows he’d win against anyone left, so he doesn’t need to burn one of his two allies when he doesn’t have to. Plus, this is the guy who took Derrick Levasseur to the final two. Cody later rehashed the convo to Enzo and Nicole in case you were somehow still unsure where he stood.

Enzo, meanwhile, had an existential cam-talk about his future. He believes the Committee carried Nicole to the end and she hasn’t done enough to win the season. And there’s the fact that she’s already won. He thinks she would only pull two or three votes if she makes it the final chairs (translation: should he take her?). He’s loyal to his bro Cody, but wondered if he needs to cut him if he wins the final HOH (yes) and if he’s done enough jury management to beat Cody (honestly, it’s probably the same, but Cody’s way ahead in every other department). Even if Enzo does conclude that he should evict Cody if he’s the final HOH, you know he’ll probably end up claiming it’s too soon to make a move when the time comes.

There’s still another full day before we get this show on the road, so settle in.