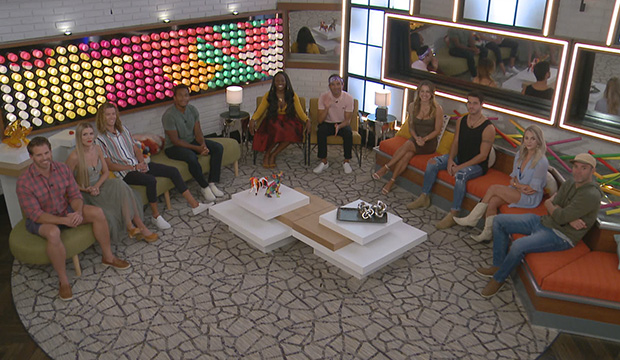 At least we have the triple eviction to look forward to on “Big Brother 22” because Cody Calafiore won HOH for the second time on Thursday. Le sigh. But real talk: When did he stop being HOH? This season has been on this doomed course since his Week 1 win and the formation of the Committee, so we’re in for another predictable week.

There was some discussion by others about Cody’s possible nominees and whether he’d make a big move, but everyone agreed he’d just go after Kevin Campbell and David Alexander. He later confirmed to the Committee that this is his plan and he wants noms to stay the same.

Look, does anyone really expect Cody to make a move? No. Was Da’Vonne Rogers‘ straight-fire speech gonna fall on deaf ears? Yes. Cody’s the most protected person in there, and while the rest of the Committee is sketched out by Dani Briones now, he’s still good with her — and everyone — so he’s going to be boring and not do anything to rock the boat when he’s been in cruise control this entire time.

Dani, though, is trying to stir the pot. She wants Christmas Abbott out and argued that Christmas would put her and Cody up. Cody countered that Tyler Crispen is more of a threat than Christmas is and he thinks her wins have been random (accurate). Dani said that she can’t nominate Christmas because she would take it personally and she doesn’t think Memphis Garrett would nominate Christmas either because they have been getting close, so Cody needs to take a shot. She also tried to pin her vote to keep Da’Vonne on Christmas, suggesting she did it for jury management (she also told him she thinks Nicole Franzel was the other one but that Nicole has denied it — it’s unclear if this is part of some master plan between Dani and Nicole). Cody would only say that Christmas would likely be the renom if either David or Kevin comes down.

Speaking of jury management, after Enzo Palumbo confirmed to Kevin that he and David were indeed going up, Kevin implied that he might give Cody his jury vote since he’s gone after him twice. Well, not to mention, this will be Kevin’s fifth time on the block and third week in a row, all via Cody and his crew. Let the man breathe for a second.

Regardless of what happens with OTEV, David or Kevin is all but guaranteed to be leaving on Thursday. The triple eviction — which they totally are not expecting (they’ve been thinking every week is a double for like the past month) — could actually cause chaos because potentially two people from the Committee could go out the door. But it’ll probably end up being one and the remaining one of David/Kevin. It’d also be the perfect time — since these people think it’s “too early” to do anything — to go after Cody, but knowing them, that won’t happen.