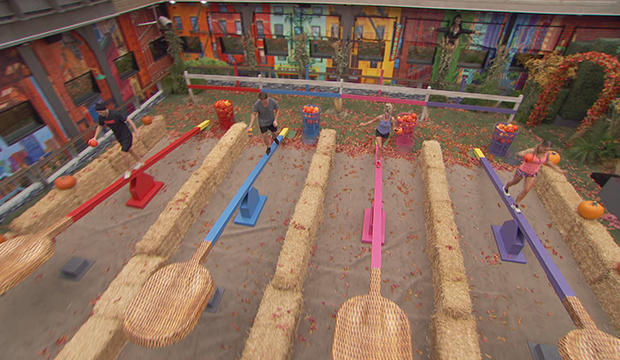 At this point, you can only laugh. Nicole Franzel won HOH on Thursday night on “Big Brother 22,” ensuring that nothing remotely interesting will happen these last few weeks. Can we just have another triple eviction and get this over with?

Good for Nicole for winning that since Cody Calafiore and Enzo Palumbo were putting the squeeze on her to pull her weight and win something. That comp could’ve also easily been thrown to her, but per their retells, it was close at the end until Christmas Abbott and Memphis Garrett dropped their balls, allowing Nicole to pass them.

She, Cody and Memphis then marveled at how the Committee has won every HOH this season except one, which went to Enzo, who was basically the seventh Committee member. Cody, not the brightest bulb, wondered what America thinks of them. Memphis and Nicole quickly responded that “they hate us.” “It would be so boring to watch,” she said. “I would hate us.” At least they’re self-aware, but really, imagine how tired we are.

There was barely any pre-noms talk because everyone knows what’s going to happen: Memphis and Christmas are going up. Christmas was initially the post-Tyler Crispen target, but now the bullseye has moved to Memphis. Deep down, Nicole probably still wants to target Christmas first, but she has no say in the vote and she’ll agree to whatever Cody wants, and what Cody wants is Memphis out now. He and Enzo believe Memphis will want Cody as the renom if Memphis wins the Veto, but Enzo would never betray Cody, yo.

So it’s going to be three vs. two in the Veto, but they’re pretty evenly matched. Every week is down to the Veto now, and the only thing we can hope for is Memphis to win it so they don’t get everything they want.