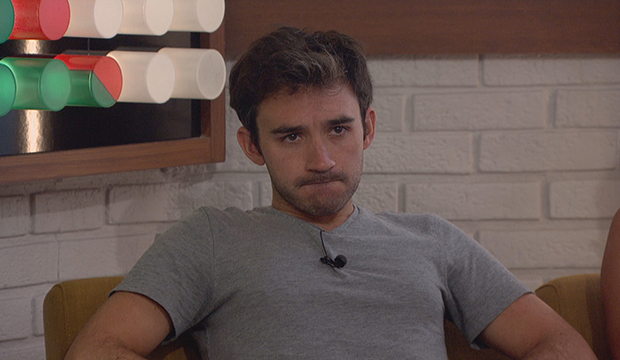 Remember when we said Ian Terry was going to have to pull a Dan’s Funeral to stay this week on “Big Brother 22”? Yeah, well, he’s doing the complete opposite of that. Dude has realized he might not be staying (bingo) and was spiraling on Wednesday, mounting a campaign that was entitled, whiny and hostile.

Ian really has no one to blame but himself for this situation. He hitched his wagon to Nicole Franzel, who did not want to put him in the Committee, and he’s been blindly following her and trusting her while dismissing the people who were trying to help him (Janelle Pierzina and Kaysar Ridha). “Blind” is really the best word to describe his game because he does not suspect at all that there’s a large alliance comprised of his ostensible allies that not only exists but actually want him out. Kevin Campbell warned Ian that the people he trusts are playing him, which got back to the Committee, so now Kevin is public enemy No. 1 next week. Ian genuinely thinks he’s a pawn (it helps that Dani Briones called him “the ultimate pawn” when she renom’d him), and that Kevin and David Alexander are flipping the house against him when in fact it’s the Committee that wants him out, spearheaded by Cody Calafiore refusing to let Tyler Crispen go.

No one in the Committee will come clean with Ian except Memphis Garrett, who told him he’s voting him out because Ian is smarter than him. That set off alarm bells for Ian, and he spent all day trying to rally four votes because he thinks Dani will break the tie in his favor (Narrator: She won’t). He also thinks he has Nicole’s and Cody’s votes for sure (Narrator: He doesn’t).  “I need your vote. If I get Nicole, Cody, Enzo [Palumbo], you, I get the tiebreaker and stay,” he told Christmas Abbott. Christmas, like everyone, hemmed and hawed and avoided promising Ian anything. It was exhausting — just tell the man you’re voting him out and end this pain for all of us.

SEE ‘Big Brother 22’ spoilers: A fight may have sealed this nominee’s fate

It was painful mostly because of how Ian was campaigning. He kept up with his threat to not vote for anyone (Nicole, particularly) to win if they played a part in his eviction (so if it’s 8-0, which it’s looking like it’ll be, he’ll abstain?), bitched about Kevin, complained about going from former winner to first juror, tried to strong-arm people to keep him, and also vowed to quit jury. The “sore loser” campaign is not a good look. Dani was so fed up with it at the end of the night that she snapped and told him to cut it out and stop threatening Nicole.

Nicole, for her part, was as much of a whiny catastrophe. She’s spent all week crying about how she can’t vote out her friend and wants to prove how much Ian’s friendship means to her. You know what would also mean a lot? If you were honest with him and told him he’s not staying and you’re not voting for him. He’s basically admitted he’d be a bitter juror, so show some good jury management here. But the most she would do was tell him she doesn’t want to go against the house and put a target on herself if the votes aren’t there. But she’s trying to save him! Really! <surejan.gif> Nicole’s also trying to save face by attempting to get Ian to let her off the hook and allow her to vote against him if he thinks he can’t rally the votes. He refused to budge.

“I pray that you get the votes to stay. I’m here to help you. What if literally everyone tells you that they are not keeping you? I feel like Tyler will come after me,” she said. “You mean so much to me. If I could give you 10 votes, I would give you 10 votes. Like you said, if you leave, my game is tanked already.”

Ian asked her if she thinks there’s a chance for him to stay, to which she replied, “Yes, I think there is a chance.” Why are you still lying?

Nicole still wants to throw a pity vote to Ian, but Dani had to again tell her not to. Dani also confirmed that she will vote Ian out if it does come to a 4-4 tie. OK, so just tell him that instead of saying you’re doing everything you can for him to stay.

Nicole: Everyone's voting him out.
Dani: You're not giving him a pity vote.
Nicole: If I don't, he's gonna scream stuff when he walks out about us.
Dani: This is outrageous. We have to make sure Kevin/Day do not vote for him. You give him a pity vote & that's it.#bb22 pic.twitter.com/cA25stzKqH

Ian ostensibly made some headway with David, making a final two deal that David accepted. David, who had a random argument with Tyler about last week’s drama, then told Enzo that he thinks Ian might stay. Enzo was like, “WTF? No. Also, he’s won before.” Honestly, who knows what is going on in David’s head. His “BB” game is just mass confusion.

Ian still has all day Thursday to try to change the tide in his favor, but between his aggressive tactics and the Committee’s commitment to the alliance, there’s a very slim chance he’s staying. Now it’s just about if anyone will tell him the truth.