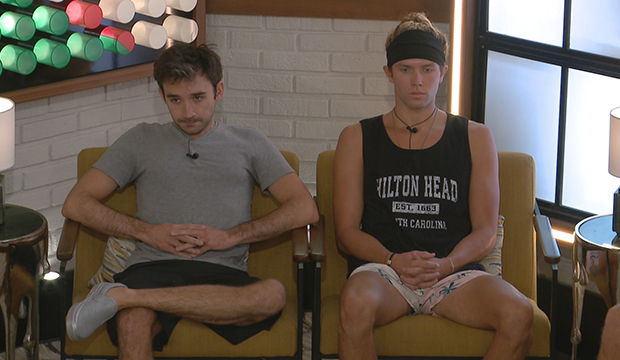 Operation Evict Ian by both sides of the house continued Tuesday on “Big Brother 22,” and despite escalating paranoia, an argument and more tears from Nicole Franzel, that is still what is probably going to happen on Thursday.

David Alexander went to work on Christmas Abbott to “flip” her to vote to keep Tyler Crispen over Ian Terry, which, of course, she was already going to do. As Christmas told Dani Briones, “What’s funny is we were keeping Tyler anyway. It will give them a confidence boost because they think that they did that.”

Well, David for sure thinks he did that. His rookie card is showing again. He proudly reported back to Kevin Campbell and Da’Vonne Rogers that he made a deal with Christmas if she booted Ian, but they warned him to take everything she said with a grain of salt. The best was when Kevin went on one of his accurate read sessions again and said Christmas was a baiter — a “master baiter.” Heh.

SEE ‘Big Brother 22’ spoilers: Both sides of the house have the same target (for now) — they just don’t know it

Kevin and Day nailed most of the alliances and connections, though Kevin initially thought evicting Ian would “weaken” Dani more because Tyler is not as connected to her. Later, Day noted that Ian is not in the core four, just a “plus one” for them. She and Kevin also discussed future boots and how Tyler would use the Veto on Cody Calafiore, so Tyler should go this week, but the numbers (or Dani’s tie-breaking vote) might not be there.

The real drama happened offscreen when the feeds were down for a few hours (during which they also got booze). Dani and Ian seemingly got into an argument because he knows he’s in trouble and told Dani he’s disappointed in the situation. Still sounds more mild that the Christmas debacle last week.

Seems Ian and Dani had an argument ..

Dani: He literally was like, this is all because of you .. there is something about Ian I can't explain it . and he used that on his first season . now like I feel like I don't know . then he's like pointing at my face #BB22 pic.twitter.com/e9Tpo624tI

Ian talks about his argument with Dani and Nicole consoling him to Xmas ..

Ian: There was alcohol involved .. Sorry is not going to do anything .. let's just go forward#BB22 pic.twitter.com/a2ssARZEJu

Later, David talked to himself and tried to figure out the pre-game alliances and thinks Tyler is playing him.

Will this change his goal for the week? Even if it does and the House flips back to evicting Tyler, there still won’t be enough votes for Ian to stay because everyone else would keep Tyler (Nicole’s reluctantly onboard). And even if there were a tie, Dani has made it clear she doesn’t want to ruffle any more feathers within the Committee. Plus, that argument probably did Ian no favors. Looks like he’s gonna have to pull an Ian’s Funeral out of his ass to stay, ironically.