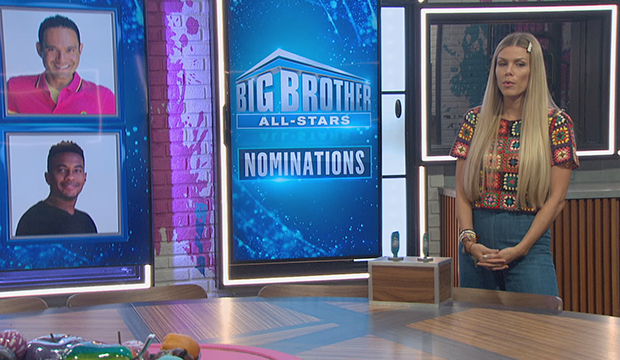 Monday was full of drama and tears in the “Big Brother 22” house after Da’Vonne Rogers used the Veto on Kevin Campbell, forcing Dani Briones to name Ian Terry as the replacement nominee. Dani did not go through with her ridiculous plan to halt the ceremony to plea to Day to not use it, but the pandemonium was alive and all.

Basically everyone not named Kevin and David Alexander were annoyed that Day used the Veto, especially Nicole Franzel, who spent half the day doing her favorite thing: crying. She’s so pissed at Day for using the Veto and being “selfish,” and now she possibly has to vote out her final two. Actual quote from Nicole’s mouth: “Why do people make bad decisions and make me not trust them?”

Yes, how dare Day make a move that will benefit her and not you — someone with whom she’s not working and who would’ve voted her out in a heartbeat if she were on the block this week? The gall. One of the most hilarious things about the majority alliances these days is the utter clueless indignation and entitlement they have when things don’t go their way because they’ve been cruising this whole time. The Committee is slightly inconvenienced this week, but they all act like Day killed their puppy and dropped its head off at the doorstep.

SEE ‘Big Brother 22’ spoilers: Dani has a bonkers plan to disrupt (heh) the Veto ceremony that will probably backfire

The Committee’s plan is still to keep Tyler Crispen and vote out Ian, which is stressing Nicole out because she wants to toss Ian a pity vote, but that would expose her allegiances and likely result in Dani having to break the 4-4 tie, which Dani doesn’t want to do. Now, here’s where it gets interesting. The Committee and Enzo Palumbo think they’re going to blindside Day, Kevin and David, who believe the target is still Tyler. But by midday, Day, Kevin and David decide that getting out Ian is a good move because he’s a former winner and a “master” player, and they start trying to come up with a way to flip the votes. True hilarity.

David later told Enzo that he thinks Ian is in an alliance with Dani, Nicole and Cody Calafiore. When Enzo asked why Dani would nominate Ian, David said she got duped. “The way I see it, we can flip and get Ian out now. They will be weakened,” David said. “Imagine Ian goes home on Dani’s HOH.”

Yes, imagine. Oh, wait, they have. Because that is already the plan. You know it’s going to turn into this.

It’s still early, but it would be something if both sides think the vote will be tight but it ends up being 8-0 to evict Ian.

As for Ian, he was initially chill about being the renom, but as the day went on, he realized he might be in trouble. His campaign thus far amounts to casually threatening everyone that he won’t vote for them to win if they played a part in his eviction. He’s also talked about leaving/not going to jury because he doesn’t want to be the first juror. His most salient argument, though, is that Tyler will sail to the end if he stays. He told all of this to Nicole, with the addendum that if he is able to leave jury, he won’t be there to argue for her to win (again).

Nicole vowed to campaign her ass off for Ian and went to Dani to rehash their convo, telling her it’s a “mistake” to boot him. Dani commiserated, but said The Committee doesn’t want to lose Tyler and if they evict him, she and Nicole would be in a bad spot. Nicole countered that it’s only two people who want Tyler to stay (really, it’s three with Cody, Memphis Garrett and Christmas Abbott). You know you’re not doing great when Nicole has a better argument than crying. Also, you all have to take each other out at some point; take the shot now. Dani advised Nicole to talk to Memphis, but warned her that they cannot save him and to be mentally prepared for Ian leaving.

Great to see Dani’s streak of hot mess HOHs continuing. It was just three days ago that she wanted Tyler out and refused to consider Ian as a nominee (after she got a talking-to in the DR for mocking his autism), but now she’s too scared to take the shot at Tyler when she has it. If he ends up taking her out, she’s going to look really dumb. Plus, no one seems to realize that keeping Tyler only benefits Cody, who is the nucleus of almost every single alliance. Ian leaving cuts off an ally for Nicole, improving Cody’s standing with her, and the anger Nicole and, to a lesser extent, Dani have at Day for using the Veto will prevent them from working together fully.

There is one alliance Cody is not part of: Day, Kevin and David decided to solidify their trio and dubbed themselves the House. Gotta slow clap for this name.

"The House" Alliance had been established!

Da'Vonne: We are the only alliance that…everyone has won something

Kevin: I'll just do what "The House" wants